Ramble: Writer's what? Noooo, not me! 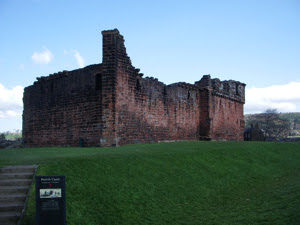 There is no such thing as writer's block. Nope. Doesn't exist. It's a fig newton of your imagination. Really. So this erratic NaNoWriMo-rebel-blogging post is brought to you by Not-Writer's-Block.

Now, when I argue that there is no such thing as writer's block, I generally say, "You could always just look down and write about your shoes, right? Right?" Right now, I'm not wearing shoes. So that's out.

I recently burbled at length about writer's block on a writing forum, though I ended up concluding that its existence or non-existence is a matter of semantics. My argument is that you always _can_ write, in the sense that you always _can_ reach out a hand and pat a dog on the head. But if you have a serious phobia of dogs, then the fact that you physically know how to pat a dog, and you have a brain-to-muscle apparatus that allows you to pat things, does not actually mean that you can pat the dog. Your brain may get the order for the muscles, take a look at the patting target, and say, "Very funny," as it instead gives orders to your running-away muscles.

I think that that's what writer's block is like. You can always write. If you can type, you can write nonsense. But if your brain is afraid of writing nonsense--afraid of what it might say about you as a writer, afraid that you'll reveal yourself to yourself as being a talentless hack, afraid that writing even a single bad sentence means that you have no standards and no work ethic and no taste and you should just crawl under the bed and stay there--then it may not relay your orders to your typing muscles. It's not about not being talented or inspired or having ideas--it's about fear. Usually perfectionist fear.

I also frequently use the learning-to-play-the-piano example. If you wanted to learn how to play the piano, you wouldn't refuse to sit down and even touch the keys if you weren't assured of immediately playing something worth selling for $14.99 on a CD, right? You would assume that your first efforts would be laughably dreadful. But people seem to assume that their first efforts at writing should be of publishable quality.

In fact, I have a clear memory of assuming exactly that back in grade school sometime. Our class was assigned to write a story, and it truly never occurred to me that I couldn't be expected to write a story that was as good as the books that I checked out of the library. I feel a faint grudge against the teacher for not explaining that but, really, how could she anticipate that I'd ever think such a thing?

How does perfectionism happen? How do people go from having moderately high standards, to standards so high that success is impossible and it looks like a better idea to just not try? Is it taught? Is it inborn? Is it brain chemistry? Is it a refusal to deal with the anxiety of possible imperfection? Is it an inability to balance priorities--that a ninety percent clean bathroom today is a higher priority than holding out for a one hundred percent clean bathroom, cleaned "right" on some distant day in the future? How is that even a priority balance? I suppose if you throw in the fear that by cleaning "wrong" you might permanently embrace "wrong" standards, but...

See, I don't like this post now. But refusing to post it would be a perfectionist decision, right? Right. Up it goes. Along with a picture that I thought would surely provide some inspiration, but aside from being a nice picture, well, it doesn't.