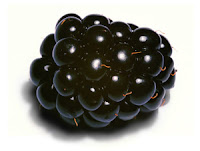 This Monday I went back to Prize for my usual chocolate tile, and came face-to-face with the Royal Apothic display. Again. I bought the Green Tea that I reviewed a little while ago, and rollered on the Blackberry. And ran away.

By the way, did I mention their Apricot, tried after Green Tea but before Blackberry? It smelled like a pleasant enough apricot, and then like apricot and soap, and that was that. Mostly linear. Perfectly adequate. Meh.

The Blackberry is also linear. But that's OK; when it comes to blackberry, I don't believe in subtlety. I sometimes buy blackberry Italian sodas, and some folks put in just enough syrup to tint the fizzy water a pale pretty amethyst, creating a low-calorie drink that tastes like not-quite-water. On the other hand, the woman in the booth down the park, year before year before last, made me one that was so opaquely purple as to be almost black. When I sipped it, I could imagine the sugar crystallizing on my teeth. And she encouraged me, all the same, to "Let me know if you want more syrup."

That's how I like my blackberry. I never tried l'Artisan Mure et Musc before reformulation, but the post-reformulation version smells fizzy and fresh and healthy, rather like that barely-amethyst soda. My objection might be based on having an inferior nose, but I gave it away anyway, to a friend who appreciates it.

The Royal Apothic version is much closer to the sticky purple drink. Sweet. Purple-smelling. Not changing the least little bit as it dries down. It's not so much a perfume as a note. I'll probably end up buying it anyway.

Image: By De-Okin. Wikimedia Commons.
Posted by Martha at 6:35 PM