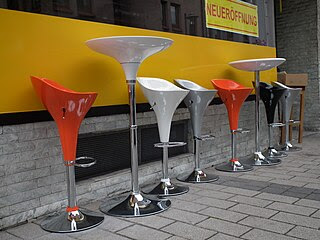 I have an iPad now.

Ever since the first iPad came out, I've wanted one, but I also acknowledged that I had Absolutely No Excuse Whatsoever for buying one. For big stuff, I had my computer. For small stuff while out of the house, I had my phone. And, heck, my computer is a laptop, so I could carry it outside the house too, just as every third person in every coffee shop on the planet seems to. So no iPad for me, nope nope nope.

Then the new one came out. And now I'm typing this on one. I no longer recall the rationalization that I used for buying it. I know that travel was involved, and the ability to access data without WiFi.

I find myself feeling weird discussing the thing, because discussing luxury items feels vaguely Wrong. Then I remind myself that this is a perfume blog, for bleep's sake. The discussing-luxury-items ship has sailed.

So. What do I use the thing for? What justifies it, compared to a laptop? Well, for one thing, I write in new places. I'm typing this while sitting on a barstool. I wrote a long rant on an airplane. I hesitate to carry the laptop, and even when I do carry it, I hesitate to haul it out and start it up. I don't have that issue with the iPad.

Now, hauling out the iPad is a habit that I've been actively cultivating since the day I bought it. I've chosen to accept--embrace--being "one of those people". The ones that eat their meals or wait for their movies or buses while typing or tapping or gesturing or staring blankly at one electronic device or another. I knew that if I didn't make a point of taking the thing everywhere, and firmly extracting it at restaurants and in lobbies, I wouldnt end up using it.

So I'm writing on it. Check.

And I bought OmniFocus, a ToDo type thing that I'll use to organize my life. Really. OK, maybe not really, but I enjoy entering reminders and plans. "Buy yogurt" and "Trace Beene jacket pattern" and "Figure out what smells funny in fridge." Personal things, not work things. I like that.

Oh, and I watch movies, of course. And TV shows. I love TV. Especially personal, private TV. It's not that I watch anything embarrassing; I think that it may be more about control and the TV being mine mine mine. When I was a kid our TV was on a rolling cart, and I used to roll it into my room for no reason other than that possessiveness. So I was delighted when Himself bought me a portable TV back in college and re-delighted when he got me a video iPod and now he's talked me into the iPad and, yay.

And I got a database app where I'm storing information about all my sewing patterns so that when I'm in a fabric store I know how much yardage I need. Also delusional? Probably. But I have entered a dozen or so patterns, complete with photographs of the front and back of the envelope.

And eBooks. I'm torn about eBooks. I signed up for the Google ones and I buy them through my local bookstore's site, so at least they get a cut. But I want to know how much the cut is, compared to a paper book. See, I'm not going to give shelf space to many new paper books, so I can either buy and read and sell or give away the paper versions, or buy and read the eBooks. I don't much care which, except for the instant gratification that an eBook provides, versus the bathtub readability offered by paper. So the profit to my favorite bookstore is a nontrivial factor, and I wanna know.

Well. So. That's all. There's an under-edited, diary like air about this post. I wonder if the iPad, due to its less fluid editing but greater availability, is going to make this blog more diary like? We'll find out.