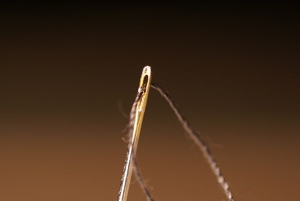 Yikes. It's been almost two weeks since I posted. I caught a cold. Is that an excuse? And I'm stressed. That usual worry fifteen hours a day, sleep eight hours, eat one hour, thing. Except the cold means that I'm sleeping lightly and have the opportunity to get in more worrying then. Somebody in charge of worrying should really pay me overtime. I seem to remember holiday vacation last year as being pretty worry-free; how'd I manage that?
So we had Christmas. It was good. Himself roasted a duck. There's crispy duck skin left in the fridge. Yum.
In addition to the sneezing and hacking and wheezing, I've been sewing. Well, I've been altering one measly pattern; no appreciable sewing has yet occurred. I started with the HotPatterns Classix Nouveau Dolman Blouse. I increased the length of the bodice and sleeves,  removed the big pleats on front and back, and blended three different sizes going from shoulders to waist to hips and cut it out from muslin and based it together and tried it on. And I have no idea whether I like it or not. There's a folds-of-fabric thing going on that might look good in an actual drapey fabric, or might just end up looking like I'm wearing melted plastic. It is comfortable; at least it's got that going for it. I suspect that whoever drafted it would take a look at my changes and wonder why I bothered to use their pattern at all. Like those movies that are named after the really good book, but don't actually resemble it.
After all this focus on a blouse, it occurs to me that I should be working on dress patterns. Why? Because the local garment fabric store (Fabric of Vision, that is, as opposed to Quiltz, which is the quilting fabric store) is having a sale in January where your discount is based on the length of the cut of fabric. More yards, more discount, up to forty percent off for four yards. Bwahaha. And a blouse doesn't use all that much yardage.
Himself said that somebody said that Buffy should be watched starting with Season 3. I don't agree, but I thought I'd start my traditional holiday BuffyFest with Season 3 instead of the first season as usual, just to see. The end of the graduation episode ("Fire bad. Tree pretty.") is on right now.
Is it deeply and fundamentally wrong that my favorite relationship in Buffy, my very very favorite, is the one between Faith and The Mayor? In fact, it's one of my favorite fictional relationships, period. Does anyone else also really love watching those two? How often do you see two fictional character derive so much pure, unconflicted enjoyment from one another's company? Sure, I can wish that they could have somehow met in another universe when they weren't evil, but would they still get along so well without the evil?
A dress pattern. I need a dress pattern, altered and ready to go. Quick.
Image: By Dmeranda. Wikimedia Commons.
Posted by Martha at 11:45 PM