Patient Garden Crop: Lettuce again, and some rambling about seedlings 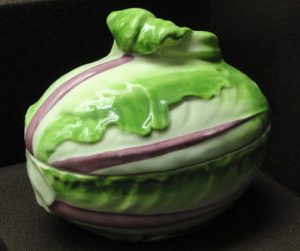 So, seedlings are not patient creatures. The plant is trapped in a tiny volume of dirt, totally dependent on you to come to its rescue when it needs water, food, light, more root room, whatever. First it wants the lights closer, closer, I'm starving! Then further, further, you're croooowding me! And water me, water me, water me right bleeping now! That's too much! Drain off the excess! My feet are all wet now! I think I see a mildew spore! Heeeeeeeelp!

But seeding in place isn't so straightforward either, at least for small seeds like lettuce. Their demands for water are, if anything, even more frantic, since the weather conditions are less controlled. And the imperfect conditions in general mean that I can't rely on every seed, or even every third seed, to sprout. I can plant three bean or corn seeds and expect two or three of them to come up; for me, the same is not true of lettuce. Part of the issue there may be lettuce seed's demand to simultaneously (1) be damp and (2) be exposed to light, in order to germinate.

I had some success with a couple of lettuce plantings, using two changes of strategy:

Soaker drills with automated watering: "Soaker drills" meaning the lines of mini soaker hose, running along slits cut in the weed fabric, that I've been mentioning in the past few posts. (If I'm going to keep making up my own phrases, maybe this blog needs a glossary.) The soakers are right next to the seed, and the automated watering timer allows us to run the watering for five minutes a day (well, we could even water for one minute a day, I believe) in addition to the usual substantial watering every several days. So the seeds don't dry out.

Presprouting the seed: Following, I believe, Carol Deppe's directions, I made myself a sprouter with a canning jar and a piece of window screening fine enough to keep the seeds in. I dump in about half a teaspoon to a teaspoon of lettuce seed (which is a lot of lettuce seed--I've been buying the larger packets since I started this) and run enough water into the jar to get it all wet. Then I pour the water out through the screen and shake the jar a bit to get the seeds to release from the screen and fall down onto the glass. The seeds should end up just damp, not in standing water. I repeat the rinse-and-drain two or three times a day. 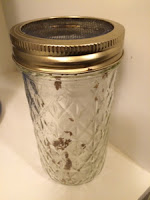 To the right is a picture of the sprouting jar. That unappetizing-looking stuff clinging to the glass is the damp lettuce seed.

I realize that "two or three times a day" and "patient" don't really seem to mesh. But it happens to be patient enough for me, because I'm going to use the sink that the jar is sitting next to several times a day anyway. And if I slip and don't plant, all I've lost is some seed, which is why I'm buying the larger packets.

The impatient part of this is that the seeds need to be planted within roughly two days of starting the process. Or at least I think they do. By twenty-four hours after the first wetting, I can usually see little barely visible tendrils breaking their way out of a few of the seeds. By two or three days, a lot of the seeds have breakthrough and some of the tendrils are starting to look long enough to break with handling.

Just because I would have liked to know what lettuce really looks like when germination is well advanced, I offer someone else's picture. It looks like, yes, it would  certainly make long breakable...er...things, if I waited too long. So far, I've caught the seed before the tendril is longer than the seed.

So I did this, twice--soaked seed, planted it in two or three days next to mini soakers, and waited. And it did great. Too great. It was essentially impossible to get the seed out in anything but clumps, so I got clumps of three, five, ten lettuce plants all fighting it out in the same spot. I thinned where I could, but most of the plants were so close together that it was impossible to thin down to just one; removing its companions would have damaged the survivor's roots too much.

Last weekend I started gently digging up entire clumps and setting the tiny plants at a measured spacing. It seems to have worked, and the result is that I have lots of decent lettuce seedlings now at a time when it's getting a bit late to start new lettuce from seed. So, yay.

But I'd rather plant at a better spacing in the first place. Two weekends ago, before the transplanting experiment, I decided to test the possibility that the drills alone were the cause of the sprouting success and that the presprouting was unnecessary. I dug a tiny barely-visible trench down a drill, got a pinch of seed between dry fingers, and dropped seed. by. seed. by. seed. down the trench. Then I covered it all with vermiculate and hoped.

The result: Meh. One of the two varieties of lettuce planted that way seems to be coming up fairly nicely; the other hasn't shown its head. That's interesting--I expected universal failure or universal success--but it's not reliable enough. And the successful one took the full two weeks to get big enough (about the size of half a sequin) for me to feel even slightly confident that it's lettuce and not weeds. The failed lettuce variety might still emerge, but I'm realizing that I've already gotten used to and spoiled by the speed with which presprouted lettuce starts growing.

So I'm back to presprouting. A few pinches of Merlot lettuce are sitting in my sprouter. My next strategy for getting a more normal spacing is the cornstarch method, where you make a thin cornstarch slurry, mix the seeds into it, spoon the mixture into a Ziploc, cut a tiny hole in one corner, and squeeze the seed/cornstarch mixture out as if you're decorating a cake. I'm going to take pictures as I do that, and post again with the pictures if it works.

Which makes me think about the nature of this blog. I suspect that a normal responsible blogger would try new things, maybe a few times, and only after working out the kinks give you a nice professional informed post about how to use that technique.

Not me. I seem to prefer blogging my uncertainty.