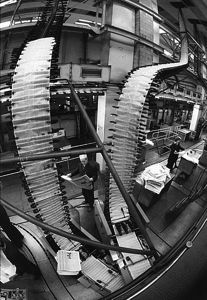 Once upon a time there was a girl who wanted to make her mother happy.

On Monday, she made her mother a stack of silver-dollar pancakes with buckwheat flour.

"Were these made with Norwegian butter?" asked her mother.

"Is the syrup from Maine?"

"Oh," said the mother, and she read her paper.

On Tuesday, the girl brought her mother a bouquet of violets.

"I think they smell good," said the girl.

"There's a plant encyclopedia under the window seat," said her mother. And she read her paper.

On Wednesday, the girl made her mother's bed. She fluffed the pillows and sprinkled the sheets with lavender water.

"What is that smell?" asked her mother as she passed with her paper. "Maybe you should open a window."

On Thursday, the girl brought her mother a copy of the New York Times. "They say it's the best paper."

The girl said, "They don't print it here. I had it shipped from Pittsburgh."

"Oh," said her mother, and she turned back to the local paper.

On Friday the girl made a papier mache bowl from the New York Times and painted the outside with red and green fish.

"Are those non-toxic paints?" asked her mother.

Her mother shrugged and went to read her paper in the garden.

On Saturday the girl baked a casserole of goose livers in the oven.

"Did you use grey French shallots when you browned the meat?" asked her mother.

On Sunday the girl chopped the livers and piled them in the papier mache bowl. She sprinkled them with parsley and put the bowl on the floor.

The cat was happy.

"What about me?" asked her mother.