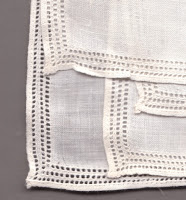 As I said to Himself while opening it, trying to topstitch without an edgestitching foot is rather like trying to work as a draftsman without a straight-edge. I was dismayed when I learned that I'd lost my old foot, and so were the wobbly-stitched shirts that were created during the foot famine. I'm delighted that the replacement has arrived.

I also got a package full of linen, which raised a question for me: Is it weird to review fabric?

I review perfume. Well, I don't know if you can call it a review, in the sense of an educated and informed professional who takes care to remain neutral, blah blah blah. I'm an amateur expressing an opinionated opinion. I also once reviewed a chocolate bar. And I've opinionated about the occasional book. So now that my obsession has turned toward sewing, and now that fabric stores are rare and so much yardage is bought online, it seems not unreasonable to review fabric.

But it still feels weird. If I reviewed, say, a Parfumerie Generale perfume, I'd have no hesitation about linking to their site. Why do I hesitate to point to the fabric store's site?

OK, I'm going to declare that it's not weird, and say that the quite inexpensive linen from fabrics-store.com seems to be pretty nice. I just received two cuts, one handkerchief linen (3.5 oz/yard) and one heavier (5.3 oz/yard). The handkerchief linen was a nice texture, fluid and not too crisp. The heavier stuff feels a little stiff, but a PatternReview poster (see? someone else informally reviewed this fabric) says that it washes up to a pleasantly rumply shirt-weight texture.

I still have to prewash it and sew it up, so I'll have a better idea then, but I'm pretty pleased--this stuff is cheap enough to use as a staple, without any obvious down side. Well, except maybe for the down side of choosing colors online. The site does offer free swatches, but they were sadly already out of one color that I wanted by the time that my swatches came, so I ordered the other interesting colors in a hurry. The cut in the color called "crimson" is a color that I would call "tomato". I love all sorts of reds, so I'll use it, but I may send off for another cut in "biking" red. This is my own fault--with free swatches available, I have no excuse for complaining about color disappointment.