Reading: 100+ status, and a request for suggestions 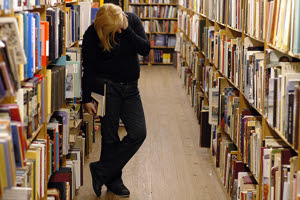 I walked through the lists from this year and last year, just for entertainment. I'm disappointed that I haven't branched out more from my usual murder mystery focus--last year I read fifty-three murder mysteries (or books that I found on the murder mystery shelf at the used bookstore, whether or not they actually had a murder) and this year it looks like about fifty as well, so far.

My other patterns remain more or less the same across the two years. I re-read a lot of Agatha Christie and Barbara Michaels. I hunt down new authors with long lists of books--Susan Conant last year, Margaraet Maron this year--and then sell their books as soon as I'm done, because apparently I'm not really all that captivated. I try the occasional book that somebody calls literary fiction--A Gate at the Stairs last year, Major Pettigrew's Last Stand this year--and then abandon the genre again.

This year I did try a little fantasy (Game of Thrones) and a little science fiction (Flood), but neither pulled me out of my usual reading comfort zone. I dabbled among all those children's books that I keep meaning to re-read, but didn't read them. It's possible that the challenge discourages me from reading children's books, because their shortness makes them feel like cheating, but I don't want to waste reading time on anything that I don't want to score.

Similarly, as Christmas approaches, I'm tempted to re-read The Lord Of The Rings, the way that I always used to over Christmas vacation, but knowing that those books will take me a while to read, and that I won't be willing to skip ahead because that would make the book uncountable, I'm resisting the temptation.

I'll probably sign up for this challenge, or another similar one, next year, but I think that I should add some more goals.

More literary fiction? Meh. I seem to have a prejudice against literary fiction, mainly because some of the people who read it like to speak sneeringly of "genre" fiction, as if a good author can't be good when writing a genre work. ("Those characters are too three-dimensional for a murder mystery! Flattten 'em! Flatten 'em now!") I realize that I'm being prejudiced based on annoyance at someone else's prejudice. I'll work on it.

More children's books? I've always loved children's books, and no doubt hundreds of good ones have been written since I was a child. And it's silly to worry about "cheating". Then again, I find myself thinking of Judith Martin saying that toys invented since a person was a child are "charmless" to that person, and wondering if the same might be true of children's books.

More science fiction? Nah. I have great respect for science fiction, but it's been a long time since I actually enjoyed it. In book form, at least--I do enjoy it in movies and on TV.

Classics? My grade and high schools were leery of anything longer than The Scarlet Letter and a little bit of Mark Twain. When I look at the Random House Modern Library list of 100 best novels, I see that I've read...eight of the board's list and nineteen of the reader's list. That leaves a lot to try. Sadly, I find that I don't feel a great deal of excitement about trying them.

Maybe I should search for a more rebellious or quirky list--the best novels written by women, perhaps, or the best children's books. Googling for list of "best books" by or for women, though, also leaves me cold--there's an uncomfortable leaning toward the heartwarming, which I assume comes from the selection process rather than being an inherent characteristic of women's writings.