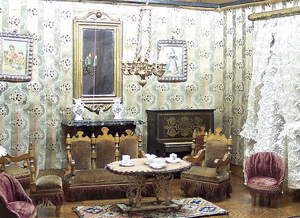 My goal this weekend was to keep tidying and decluttering. My success was limited, but there are five boxes of books, one of magazines, and one of clothes, bundled up and ready to go. These don't count as DCOTD material, because they haven't gone yet, but it's still good.

And there are substantial pockets of tidy. I'm particularly pleased with the hall shelves, all nice and neat and organized for use. There's a section for library and borrowed and new books. And another for books waiting to be shelved. And the subset of cooking magazines that we're keeping is organized in month groups--after all, in November you don't care about the recipes from Thanksgiving of 2007; you just want all the Thanksgiving issues. And the popcorn bowl for wallet cards that are rarely used, like the cupcake punch card or the discount card for the bookstore in another state that we may get to a few times a year.

Details, details; what's my point? My point, I think, is that it delights me to have a home that has systems.

See, I grew up in a hoarded home. Oh, it was a mildly hoarded home--it would never never make it through the audition process for either of the Hoarders shows. But an important thing to know about a hoarded home is that it's organized for the convenience of the hoard, not for its occupants, not even for the hoarder. A hoarded home is owned by the stuff. And systems are for people, not stuff. Therefore, we didn't have systems. Most of the closet and bureau and cabinet space in the house was filled with rarely-used junk, and the things that we actually used either had to be shoehorned in and out, or had to find some surface to perch on. Even the refrigerator crisper generally contained more decayed than usable food.

The situation wasn't entirely out of control. When it was no longer possible to put a fresh item in the crisper, it would finally get cleaned out. The junk usually only filled the closets and bureaus, and maybe a thin layer stacked on top or nearby; the piles were low, and there wasn't much overflow onto the floor. But that strikes me as all the stranger. Clearly the situation wasn't one of uncontrollable accumulation. But if it was possible to stop accumulating when all of the storage, plus a bit more, was full of stale unused items, why wasn't it possible to clear some space for items in actual use?

It was as if a home that was arranged in any way for daily life was a little bit distasteful. We crept around the edges of the house, using elements of it rather like a peasant farmer, tasked to maintain an ornamental garden, might surreptitiously grow a few vegetables in a corner somewhere. Concern for our own convenience and comfort would be like eating an ice cream cone in church, except it's not a deity being worshipped, but junk. I find it interesting that my metaphors are about food. Our home didn't feed us. We fed it; we fed it junk, and then we left it in peace and tried not to disturb it as it digested.

The house did let people live there, but grudgingly. Drawers stuck and weren't fixed, handles fell out and weren't replaced, one of the stove burners failed and was never repaired, the bottom of the sink cabinet rotted out and was never renewed. One of the base supports for my dresser fell out of the front right leg regularly, several times a year, and several times a year I took the bottom drawer out and shoved the support back in the leg. It never occurred to me that it could ever actually be fixed. It wouldn't hold any more stuff if it were repaired, it would only be more convenient for the humans, and what did that matter? I remember my puzzlement when a neighbor friend talked me into painting my battered old bedside table; the idea of making a household item prettier and cleaner was a revelation to me.

The rice pot--I've mentioned that rice pot--had no handle on either pot or lid. We used the pot a few times a week, but why should a handle matter? Handles are for people. Closets exist to hold as many hangers and garments as possible; the people who might want to use a tiny subset of those garments are just there on tolerance. I maintained a running battle against my room, organizing the junk into the drawers and closet and making the room look civilized for a brief moment, only to have it revert to chaos again in days. It never occurred to me to keep less junk; that would, again, just make the room more convenient for me.

I'm casting all of the issues with my childhood home as being about hoarding; I know that there were other issues, there were relationship issues, there were two adults who were too unhappy with their lives to do anything about the stage on which those lives were acted out. I sometimes wonder if I'm just nursing petty grievances.

I do feel grievances. I couldn't dream of having a school friend over to the house. My parents never, ever had people over; I reached a pretty advanced age before I realized that adults had friends. We were so isolated that I was well into my school years before I was able to speak to a stranger to order my food at a restaurant; for years, my parents had to order for me. That fact apparently didn't worry them. Neither did the fact that, aside from a neighbor or two, no friends visited my home or invited me to visit theirs. I often wonder; should it have worried them?

Image: By Christina. Wikimedia Commons.
Posted by Martha at 1:01 AM