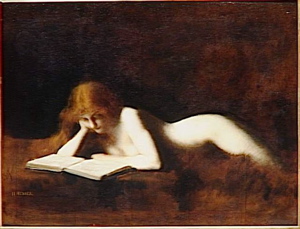 Last night, being unimpressed with my latest batch of library books, I picked up The Thoughtful Dresser by Linda Grant, a book that I've discussed before. It's a nonfiction book about fashion, not a topic that normally interests me. It goes deeper than fashion, or it goes to the depth of fashion, whichever way you might think about it. But all the same, I don't care that much about fashion, and I love this book, and I concluded that that's because Linda Grant is an extraordinarily good writer. She's not the showy kind of good writer, the kind where you're always noticing specific phrases. Instead, she's the kind that makes every word communicate, seamlessly, so that you're not consciously aware of the words. Reading the book, I feel almost a sense of motion, traveling down the path of the thoughts at a moderately fast clip, so that I'm never bored or wanting to get to the end of the passage or the page. And that metaphor doesn't work altogether, because I'm not just passively traveling; as I read, I feel as if I'm somehow involved in making the journey happen.

That made me think about my favorite nonfiction books, and my favorite nonfiction writers. I started making a list. I'm narrowing the criteria--I'm not including memoirs or biographical works, or primarily comedic books, or what I'd call "nonfiction novels" where the book is different from a novel primarily because it happens to be true. So, for example, American Fried by Calvin Trillin, one of my very favorite books, isn't in the competition because the author is the main character in most of the pieces and therefore it has a little too much memoir, and also because it's so very, very funny. But I still recommend it. Go read it. Then read the other two in the Tummy Trilogy. Then read everything else Calvin Trillin ever wrote.

OK, moving on to my favorites among books that fit the criteria:

The Essential Earthman,  One Man's Garden, and Henry Mitchell On Gardening. Henry Mitchell is the best garden writer. Period. He was a journalist, and I find that that's something of a pattern among my favorite authors. He wrote a gardening column for the Washington Post from 1973 to his death in 1993, and the books are drawn from those columns.

I'm at a loss to describe his writing. It combines solid information with philosophy, but something about that statement suggests the cute and pseudo-profound, and that is as far from Mr. Mitchell as I can imagine. I learned most of my gardening knowledge from these books, the information settling into my mind so quietly that I can't remember the time when I didn't know it. But I re-read the books for the philosophy and the sheer pleasure of the words. Deborah Needleman, in an essay on Henry Mitchell, said "He provides a sense of comfort, much like the feeling you get from a cookbook when you have no intention of making any of the dishes. He had scores of devoted readers with little or no interest in gardening."

I've never read his fourth book, the one that isn't focused on gardening; I suspect that I'm reluctant to reach the point where I've read all of his writing and there is no more.


Why We Buy, by Paco Underhill. I'm annoyed with myself; I can't find my copy of this book. I'm not interested in retailing or marketing, so it's a prime example of an engaging book about a topic that doesn't interest me all that much. I am interested in psychology, so that's part of the explanation. Psychology and anthropology, maybe. The appeal is, I think, mostly the author's instinct for stories and nuggets of information that will fascinate, combined with engaging writing.
Oh, dear. And I see that he has another book out. The second book, The Call of the Mall, didn't appeal to me nearly as much as the first one. But now there's one called What Women Want, and I'm tempted, though the reviews are lukewarm.
Nassau Street and Fun and Profit in Stamp Collecting, by Herman Herst. Henry Mitchell is the best garden writer; Herman Herst may well be the best writer about stamp collecting, though my reading in that area is much less extensive. Mr. Herst dealt stamps from 1933 through 1973, putting him right in the middle of the most exciting events of philatelic history--or were they so exciting because he brought them to life by writing about them? It's hard to say. He also qualifies as a journalist by my standards, contributing columns to "virtually every stamp publication in the country," continuing well after his retirement.

Mr. Herst's writing is less philosophical and more consciously instructive than Mr. Mitchell's. His books are full of stories and advice--in fact, each chapter of Fun and Profit is titled with a piece of advice, such as "Cheap stamps never become rare." I haven't collected stamps since junior high, but I was delighted when I recently found that Nassau Street was available for purchase; I suspect that I would enjoy these books just as much even if I'd never collected. They're full of stories, psychology, and anthropology; that, too, seems to be a pattern in my favorite books; it describes The Thoughtful Dresser as well.

I can see that writing this post is going to end up being expensive; I hadn't realized that there are several more Herman Herst books than I was aware of. And some are in print.

Much Depends On Dinner and The Rituals Of Dinner, by Margaret Visser. Stories. Psychology. Anthropology. Here we are again. In Much Depends On Dinner, Ms. Visser takes the ingredients of an ordinary meal--chicken, salt, butter, corn, and so on--and follows their roles in human customs and history. The Rituals of Dinner has a similar approach, but it follows dining customs rather than food. I've blogged about these before; I still love them. To my dismay, I don't love Ms. Visser's other books as well; I'll be trying them again, but these two are the ones that I'd urge you to make the time to read.

Googling tells me that Ms. Visser is a "broadcaster". Does that qualify her for the journalist pattern? Hmm.

The Fear of Cooking, by Bob Scher. This is a delightful combination of cookbook and therapy for kitchen phobia. As written, it takes the non-cook through facing their fears and cooking, but it's fun to read whether or not you ever turn on a stove. (Quote: "I mean, here's a whole duck, say, and it's cold and guppy and slimy, with pieces of skin flopping around.") I think that the journalist pattern here fails, unless it helps that the author is, among other things, a documentary filmmaker.

All of the Miss Manners books, by Judith Martin. I feel a little odd including books that are written in question-and-answer format (interleaved with essays), but I don't care. Judith Martin is funny and intelligent and an extraordinarily good writer, and her expertise isn't just in etiquette, but in human problem solving. Psychology. Anthropology. Stories. She's also (ta da!) a journalist.

The Forest for the Trees, by Betsy Lerner. A book of advice for writers--not advice on when to use an adverb, and how to avoid passive voice, but about, to quote her, "what makes writers tick." I'm interested in the topic, but I also just really like Betsy Lerner's writing. I bought this, I bought Food and Loathing (a memoir-like book, so it doesn't qualify for this list), and I'll probably continue to buy any book that she writes.

There are, without a doubt, many more. That's why I'm pre-titling this Part I, though I don't yet have a list for Part II.