Rambling: Decluttering and the whacky 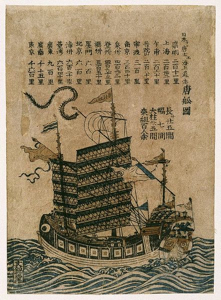 The house is a mess.

Now, it's not the same kind of mess that our house used to be years ago, or the same kind of mess that my mother's house was when I was a child. I know this, because we expected guests at 6:00 yesterday evening, and I didn't start the frantic cleaning process until 5:00. Several years ago, guests would have called for a day's notice or more. At Mom's house... well, let's just not think about it.

However, when guest preparation involves making sure that I close more than a certain minimum number of doors, that means that the house is a mess.

I'm discovering that the house being a mess is a useful thing. I scanned a stack of twenty-four sewing and craft books, a stack that I considered to be the hard-core remainder of my sewing collection, after multiple thinnings. But, driven by the mess, I thought I'd have one more look at them and see if I can find one or two to put in the "sell to the used bookstore" stack.

It's clear that my customary strategy of, "Let's get this place tidied, and then let's do some decluttering" is flawed. This weekend's plan is declutter first, tidy second.

Drifting to another angle on the same topic, I've mentioned that I worry a lot, right? About everything. And my worries have an irrational tendency to make me doubt what I'm doing. I think thoughts like:


Yes, I see the fourteen dozen different ways that these--especially the last one--make no sense whatsoever. But my point is that yesterday, I realized that there is no scenario where decluttering doesn't look like a good idea to me. If I get fired? It'd be great to have a cleaner house to update my resume in. If I get sick and promptly die, it'll be great to have all my stuff neatened and dealt with. If I accidentally do something really bad and get arrested... well, OK, there's no particular advantage to having a clean house, but there's no down side either. And, of course, if the world continues on its normal track, it'd be nice to have it continue with a tidy house.

A chunk of badness landed today--something happening to someone else, not me or Himself, but badness all the same. Decluttering tomorrow will be good.