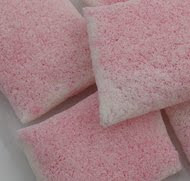 This time, when I ordered from BeautyEncounter, I remembered that I'm entitled to rack up three of those "surprise me with a perfume sample!" things, and I did. They sent me samples of Ellen Tracy Linda Allard Limited Edition, Hugo Boss Boss Woman, and Jessica Simpson Taste Delicious Dessert Deliciously Kissable Fragrance Somethingorother. The card has me confused; I'm just calling it Taste, because that's the word with the biggest print.

I tend to ignore new designer or celebrity perfume samples. I always mean to try them, because who knows?, but they have to get in line behind the carefully chosen niche or classic stuff, and much later I come upon them and I don't know how old the sample is, or even if the perfume still exists. So they never make it to the head of the line. I thought that I should break that habit.

In addition, I decided that I must work on my perfume-snob traits and either break myself of the snobbery, or develop a really enjoyable self-righteous glow of justification about it. So I'm going to try these samples. And I'm going to start with the scariest one.

All of which explains why I just removed the (pink) vial of Jessica Simpson Taste from its (pink) card and decanted its few (pink) drops of perfume into a (plastic - I have limits, and putting pink perfume into glass strains them) atomizer.

And nervously read the card, which did not still my fears:


The first thing I noticed was plastic vanilla and coconut. That wasn't a surprise.

The second thing that I noticed was that it took an unusually long time to dry, and had an odd big-drops-of-liquid texture as it did. Is there no alcohol in this? Does that signal that it's a children's perfume? Or is the name more literal than it seems and you're supposed to eat the stuff? No, the card addresses that: "THIS IS NOT A FOOD". OK, then.

The third thing that I noticed was that it's surprisingly light, to the extent that the nightmarishly horrible fragrance of the dishwashing soap that I used earlier was drowning it out. The comparison was actually useful - if I was tempted to compare Taste with household-products scents, the smell of the soap on my hands assured me that, no, Taste does not even begin to plumb those depths of awfulness.

But back to what it smells like. After waiting for it to dry, and washing the dish soap awfulness off my hands to the best of my ability, it still smells like plastic vanilla and coconut. Do you know what I mean by plastic vanilla? It's hard to explain, but almost every vanilla-dominant fragrance below stratospheric price points smells plasticky to me, like you soaked a clean piece of rubbery plastic in a dish of vanillin and then cut it open and sniffed it. Some more so, some less, and fragrances that just have vanilla as one of many notes don't have the problem, but this is an ongoing problem with me and vanilla. It's why I keep being tempted to pay the money for Indult Tihota.

OK, back to Taste. I do keep veering, don't I? Plastic vanilla, coconut, no appreciable white musk (thank goodness), a little bit of powder, and a little bit of New Barbie Doll. In fact, it's what I can imagine Barbie wearing when she goes out to the arboretum with Ken on Valentine's day. I'm afraid that it doesn't pass the "would you rather wear this or nothing?" test, but that's my nose, and my nose is extremely intolerant of plastic vanilla.

So it's not good, and if I got it as a gift I'd give it away, but it's not dreadful. It has that childhood, Barbie doll, pink candy and fake feather boa vibe that could make it a guilty pleasure.

Review Roundup: None, because I can't determine with any confidence exactly what the thing's called, so I don't want to point to reviews that may be for something somewhere else on the flanker family tree.

Photo: By Oatz. Wikimedia Commons.
Posted by Martha at 12:09 PM