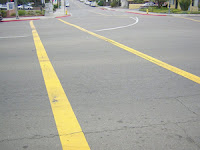 So. Myrrh. Gold is happy and glittery. Frankincense is spiritual and serene. Myrrh?

Death. At least, that's my take on the major symbolism. Death and suffering. And what kind of third post is that, the day before Christmas? I'm not clear on whether myrrh was intended to comfort the sufferers, or just symbolized the suffering, like a smell that served the same purpose as a shroud or black funeral clothes.

I've been talking about my childhood self in these posts, though I can't claim that that was a plan. (I can't claim that I had a plan.) I remember the first death that I grieved, that of the retired policeman, infinitely tall and reassuringly wide, that supervised the crosswalk that I used to get to kindergarten--no doubt with Mom watching all the while, but I remember it as a daily journey on my own, my first foray out into the world.

He would talk to me and, amazingly, he got me to talk back, four-year-old me who was all but mute even with my kindergarten teacher. He died that year, and Mom quotes something that I said when I was told, probably something about Heaven, and definitely a protest against the idea that he wasn't coming back.

I don't remember the quote.  I do clearly remember the first day crossing the street with his replacement, a much younger man, perhaps a new recruit instead of an old retiree. He was bright and cheerful and efficient, putting the best face on a job that he no doubt hoped would be extremely temporary. He wasn't the least bit interested in pausing to wait for a tiny person to choke out something to say; I remember trying to get a verbal feeler out, trying to transform him into a substitute for "my" policemen, and him bustling brightly away before I'd even gotten started. I realized that no one was like my policeman, and that my policeman was indeed not coming back.

So that was death. To steal from that poem, I did not approve. I still miss him. I sometimes wish that I could send a decades-late reminiscing sympathy note to his family. He continued to populate my mind for a long time; I thought that Santa Claus must surely be like him, and perhaps one of the Three Kings, too, was a good man near the end of a life of responsibility, not just worshiping a King but reaching out to a child.

Now I've gone and made myself cry and, y'know, Querelle is good for that. Maybe myrrh was for comfort after all. The descriptive material on LuckyScent refers to this as "sensual", to use one of the milder adjectives, and apparently the namesake film is... well, I'm just not going there at all, because I get none of that from this scent. Querelle is a medicinal perfume to me, clean and sharp, with that protective feel that I get from Fou d'Absinthe, even though there's very little similarity otherwise. It is a bit inhuman, but in a sorrowful way, not a dangerous one. Comforting, and very peaceful.

And there ends my Three Kings week, on a sad note, but it's good to remember an old friend. For more of Three Kings week, please have a look at these lovely blogs:
And thank you, Krista and JoanElaine, for inviting me! I've enjoyed this very much.