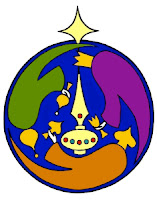 I didn't grow up associating incense with churches or religion. Neither the Unitarians on my mother's side of the family nor the Baptists on my father's favored that particular ritual. Both parents veered away from their family spiritual choices--Mom to the Methodist church, my father to the philosophy of Henry James--but that didn't get me any closer to smelling sweet religious smoke.

Incense, to me, was represented by those sticks that "hippies" bought in odd little stores. As a small child, I thought that they were actually illegal--which of course made them fascinating and romantic, but certainly nothing I'd ever buy, or even rummage through to read the names of the various scents. I was a painfully law-abiding child.

I remember having that same shocked respect for displays of beef jerky sticks. While they were no doubt legal--nothing sold in gas stations, the most unromantic places possible, could be otherwise--I always assumed that they would require dental equipment beyond that of a normal human, dental equipment that one acquired along with one's hunting license. Sometimes I wish that I could interview my childhood self to find out where she got this stuff.

My ignorance has been a handicap in learning to appreciate or understand incense-based perfumes. I'm sure that they have all sorts of cues for perfume lovers who can understand them--this one is classic church incense, that one is from India, this other one from Japan, and so on. Maybe combining cathedral incense with (for example) Japanese herbal notes would be a delightful surreal experiment in jarring contexts. Maybe olfactory incense jokes could even make a person laugh. I wouldn't know.

Now, if I'd thought of incense as being associated with fire, perhaps I would have crossed those boundaries, at least to the point of sniffing the sticks at the store. I love fire. I love smoke. I love the smell of a just-struck match. I always wished that I lived somewhere where it was legal to burn leaves in the fall. I'm delighted that Himself insisted on a fireplace when we remodeled the house.

We never had a fireplace when I was a child, so Mom sometimes allowed me to make tiny fires in baking pans or structures of aluminum foil, sitting at the kitchen table burning matches and toothpicks and melting Green Army Men. This sort of risk was utterly incompatible with Mom's normally safety-first philosophy. I suspect that she observed my love of fire and feared that if she didn't give it some condoned and supervised outlet, my awed respect for the rules would break down and I'd go playing with matches on my own.

I suddenly realize that there's a trend here. If you add Fourth of July sparklers, glorious things with a fuzzy legal status in the states where we lived, then to my childhood self fire and smoke was all about crime, romance and danger. No wonder I don't "get" the soaring serenity of Avignon.

And what about Regina Harris Frankincense Myrrh Rose Maroc Perfume Oil? Well, it's not what I expected. I thought that it would be a shadowy confusing tangle of scents; I imagined getting lost in it, chasing down the notes. But as it turns out, it's so thoroughly blended that I can't find individual notes. There's certainly some dark richness and smokiness in there, but the overall effect is almost comforting, rather than adventurous.

It's medicinal, but it's a "good for you" kind of medicine, not the kind that you take when you're actually sick. I can't tease out the rose, but I can sense it there, sweetening the bitter notes. And there's not that much bitter, really--maybe it's the oil form of this fragrance that's blunting all the sharp edges. I usually fervantly dislike myrrh and mildly dislike frankincense, but in this fragrance I like them both just fine.

And that's all I have for you in the way of a review; my incense vocabulary is simply not equipped to speak to this fragrance. All I can say is that I like it, even though I don't understand it.


And don't forget! Amble over to these blogs for more of Three Kings week:
Review Roundup: Fragrantica and Basenotes and Nathan Branch and Perfume-Smellin' Things.