Rambling: "What does it mean, exact change?" 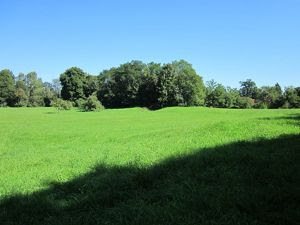 I'm three hundred and eighteen words behind on NaNoWriMo. More blogging is called for.

Last year, when my inspiration was limited, I used to go to Wikimedia Commons (where almost all of my imags come from) and click the "Random File" button until I ran into a picture that seemed right.

Today, this one appeals to me, though it's not really inspiring either stories or thoughts. Well, except that for no logical reason it reminds me of that Star Trek movie where they park the shuttlecraft in the middle of somewhere with its cloaking device on and Kirk reminds everyone to "Remember where we parked!" That's my favorite of the Star Trek movies. While it doesn't compete with, say, The Trouble With Tribbles, it's the closest to the funny episodes of the series, and I always like the funny episodes best.

You can see it out there in that field, right? The invisible shuttlecraft?

I like the funny episodes of most dramatic series best. When re-watching the X Files from DVDs, I tend to skim right past the arc episodes and pay close attention to the ones with the...well, I'm about to describe them with spoilers, and that would be wrong. I love the one with the weirdness at the trailer park ("Come on Scully, get those little legs moving!") and the one with the weirdness at the gated community ("Mulder, if we ever go undercover again I get to choose the names, okay?") and the one with the baseball and the nontfat Tofutti rice dreamsicle. Actually, that last one is definitely an arc episode, and it's not all that funny, but I love it; maybe "funny" isn't a complete description of what I ilke. I suppose I like the moments when you get a good look at the characters and their, er, character.

I had hopes of more funny; I was hoping that after the Trek crew rescued Spock and got in trouble, they'd decide to forget all this bureaucracy and steal the Enterprise and just go joyriding through space without all that Prime Directive nonsense. Sort of like the folks in Firefly, but with a lot more weaponry. I would have enjoyed that.