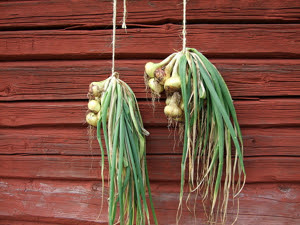 You may have noticed that I tend to make Big Plans That Fall Down. The latest ones involve food.

See, I've been resolving to do more cooking. Partly to save money, and partly so that if we keep up the "farm"ing, we actually eat a decent percentage of the crops. And partly for better control over my diet. "Diet" in the "foods habitually consumed" definition rather than the "trying to lose weight" definition. Though both definitions are relevant.

But we've learned that we tend not to properly cook on a nightly basis. So that leads me to cooking for leftovers, and cooking-and-freezing, and so on. It could even lead to canning, except for my fear of botulism. I know that many people have canned without dying, but it makes me twitchy.

There's Once A Month Cooking, a concept that probably doesn't need a whole lot of explanation. You buy a lot of ingredients, you spend a chunk of the weekend making large batches of several dishes, you freeze 'em, and boom! You have a month's worth of food ready to reheat. Well, I don't suppose there's anything magical about the month, it's just a tidier acronym than, say, "once every five weeks cooking."

We even have the freezer, so there's really nothing to stop me from making a giant pot of...

OK, do you have recipes (maybe "recipes" is too dignified a term) that you make when you're going to be eating alone, when no one else can see just how much of a food barbarian you really are? One of mine is...Goop. There's Chicken Goop and Pea Goop. Really, Chicken Goop is essentially simplified Chicken a la King (chicken, frozen peas, perhaps slow-cooked onions, in a cream sauce), but to be most authentically Goop, the cream sauce is overcooked and overbuttered to the point that it "breaks", the fat separating from the thickened sauce. Pea Goop is what you make when you want Goop but you don't have any chicken. They're both morally wrong. Yum. I could happily make a giant pot of Goop, divided it into Ziplocs, and eat it whenever I'm in a sad butter-craving comfort-food mood.

Not that that's relevant to the farm. We don't grow chickens on the farm (They grow on vines, right? And the features are green until they're ripe?), and it's unlikely that we'd grow enough shelling peas to need to stash the leftovers in the freezer. Fresh shelling peas are so good that I'm not positive that they'd even make it inside to a buttered pot. But I wonder how other vegetables would freeze in a cream sauce? Would they do that thing that so many frozen vegetables do, where the freezing seems to tear them apart from the inside, or would the magical blessing of butter prevent that? Sugar snap peas, for example, come to mind--a much more plentiful crop than shelling peas, but similarly pleasing.

I would have assumed that onions would be ruined by the freezer, but I recently read that caramelized onions freeze extremely well. The obvious realization comes to me just as I type this: That means that I can grow quite large quantities of Copra onions next year and caramelize them en masse, rather than struggling to make space for the bulbs in the freezer. In fact, I could caramelize this year's modest crop, and the remains of last year's crop (yes, they did survive a full year) and put the results in the freezer. Though the crops are small enough that I might be tempted to just eat all the finished  onions with a spoon.

I could similarly cook a great volume of tomatoes down into freezable tomato sauce. The difficulty with that is that tomato sauce is available at every grocery under the sun, or a least in the state, and I don't know if the homemade kind is significantly better, especially after a few months of freezing. Now that I've had the onion inspiration, I'm tempted to forget the tomatoes and just grow more onions.