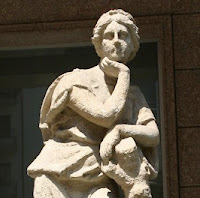 I get bored easily.

There's a theory that people with ADHD don't just have a problem with attention, but also with rewards. Brain rewards. As normal people work on a task, the "gratification/pleasure" circuits of the brain provide reinforcement even before the real-world reinforcement of a completed task is reached. So all those people who sneer about will power and staying on task may just be people who have a functioning brain reward system that agreeably gives them intermittent mental biscuits for working on a task.

This suggests a model of the brain that's disconcertingly...well, not random, but driven by semi-random events. It's as if our brains are Rube Goldberg machines that just happen, due to millions of years of evolution, to end up with the ball bearing dropping on the cymbal and waking up the hamster--or whatever the machine's supposed to do. A tiny failure in adjustment and the ball bearing just falls into space and the hamster keeps on sleeping. Or, as seems to happen in my brain, the hamster runs through the maze chasing shiny cheese when he's supposed to be exercising on the wheel, or vice versa. Except that an ADHD-brain-hamster would never exercise on the wheel. Because it's boring. Cheese, on the other hand, is tasty. (Reward.)

This post is not primarily about ADHD or staying or task or any of that stuff. It's more about that reward system. My brain seems to crave rewards, and it increasingly seems that it's worthwhile to arrange rewards for it. A while ago, I posted that my perfume shopping moratorium seemed to produce a creative depression, and in fact a mild general depression. I proposed that regular perfume browsing was giving me a dose of dopamine and keeping my brain on a contented creative even keel, and that eliminating that browsing threw all that off. Actually, it's more specific than that--eliminating browsing with the option of purchasing threw all that off.  No purchase option, apparently no reward in the browsing. Returning to a situation where I was allowed to buy perfume, even if I bought it very rarely or in fact just considered buying it, got the creativity back online.

Which is...weird. And leads me to wonder what other activities might have a non-obvious brain-feeding reward.

Because I suspect that there are any number of them in my life. In fact, I suspect that I'll find that most of my habitual, comfort habits are about feeding happy neurotransmitters. Remember when I discovered that most of my lifelong snacks were tryptophan-rich foods combined with the carbs that are needed to help tryptophan-rich foods produce serotonin? Yeah. Does perfume itself, sniffing it and wearing it, help straighten up a brain that's on Tilt? Does reading? Forum posting? Writing?

Why is it that I can do boring repetitive tasks for hours in the garden once I've dragged myself out there? I love sewing and cooking, but I have to push myself through the boring bits; I don't have to push myself through the boring bits of gardening. And the rare occasions when I can just sit and stare, mindlessly, without doing things, without thinking through things, are usually occasions when I'm staring blankly at leaves and plants. If my brain isn't driving me to go get it a biscuit, dagnabbit!, then I assume that it's somehow already getting fed.

It's a puzzlement. I was hoping to end this post with some sort of conclusion, but, well, apparently not.

Image: Wikimedia Commons.
Posted by Martha at 12:21 AM