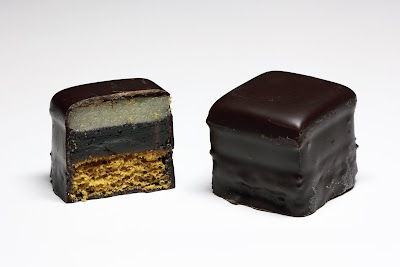 Haaaaaaappy Thanksgiving! Are you eating turkey? What are you wearing? Chergui? Eau de Gravy? We are not cooking this year; we're on vacation, watching home improvement shows in the hotel, and seriously considering just going with room service. That sounds so perfect that it must surely be wrong.

Yesterday, in anticipation of the celebration of Eating Everything, I tried some artisan chocolates. No, not candy--perfume. I dabbed on samples of Ayala Moriel Film Noir, Ayala Moriel Guilt, and Aftelier Cacao. None of them are going to quite fulfill the role that I had them fitted for, but I want them anyway.

For some reason, I thought that Film Noir had vanilla, but it turns out that I was misreading the combination of soft patchouli and cocoa. It does have a similar mood--edible, sweet, soft, and friendly. The patchouli is earthier than the vanilla would have been, and with the chocolate, it gives me a feeling of falling into soft dust. Like a leaf pile of cocoa. I still don't get "noir"--there's nothing dark or threatening here. But I think I want a bottle. (Notes: Benzoin Siamese, Cocoa Absolute, Myrrh Patchouli)

Guilt starts out orange--gorgeous, bright but dense, sweet but with just the right amount of peel. It's not like eating the orange or the peel or candied peel--it's like the fog that rises after ripping open a really good orange, but more concentrated. I discussed it just a few days ago, but I'm not going to go read that post to see if my perception is consistent, because who wants consistency? There's chocolate, too, less powdery than the chocolate in Film Noir: I can imagine dark shiny melted chocolate. But it's also farther away; in the fantasy created by the perfume I can smell it, but I'm not eating it. Over time, the orange fades away and the chocolate settles into cocoa powder again, and then it's all gone, faster than Film Noir--about twelve hours after application, the Noir arm still had a gentle puff of patchouli, while the Guilt arm was almost scent-free. (Notes: Amber, Benzoin Siamese, Blood Orange Cocoa Absolute, Honey Absolute, Jasmine Grandiflorum Orange Blossom Absolute, Rose Otto) So Guilt won't be my all-day orange perfume, but I want it too.

And the Cacao arm? At that same twelve hour point, it was back to a very faint breath of orange. It had started out as a gorgeous and gorgeously weird combination of chocolate and bright orange--a little brighter and more aggressive than Guilt--and. And. Um. And what? Something animalic, something absolutely not edible, something that I would have predicted would be just wrong with those food scents, but it worked perfectly with them. Looking at the notes (Blood Orange, Pink Grapefruit, Jasmin Sambac & Grandiflorum, Chocolate, Vanilla), I have no clue what it is, except maybe a delightfully dirty aspect of the jasmine. The orange fades, the stinky animal fades, and for a few hours it's hard to tell Cacao and Guilt apart. But at that twelve hour mark, oddly, the orange seemed to be back--a faint breath of it--and I do like that as a final note.

I want a full bottle of them all. So there.