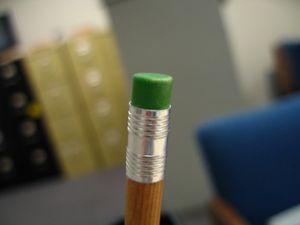 So, a large part of hoarding is denial.

So I like to keep an eye on my collections. My stashes. My hoards. I don't usually call them hoards, but I suppose I like to keep myself from avoiding the word, in case that slides into denial later. To me, these words all signal "excess"--not necessarily evil or irrational excess, but definitely an excess beyond what I need. If I keep reminding myself that, yes, I am storing things that I don't actually need, then I will hopefully remember that if those things get "out of control", that's because I chose not to control them.

I think that's one of the places where hoarding starts to slip off the edge. If you start to feel that you have an obligation to keep the stuff, then you start to think that you no longer have a choice. That sense of obligation can take a lot of forms:

"Auntie June gave me that, and she's dead now!"
"That's a family heirloom; I have to keep it for the kids."
"The kids might want to give those toys to their kids."
"There might be a natural disaster and I'll need that food."
"I spent good money on that; I can't get rid of it."
"We might need to touch up a spot with that paint."
"I might lose my job and need to sew my clothes with that fabric."
"I spent good money on that sewing machine; I have to buy fabric to sew with."
"I neeeeed it!"
"I waaaaaant it!"

I would argue that the vast, vast majority of the time, the reasons come down to the last one--you want it. Even if you don't want that thing because you love it and use it, you may "want" it because you'll feel guilty if you give away Auntie June's last pair of bedroom slippers, and you'd rather keep the thing than feel the guilt. You've converted a preference--the preference to avoid anxiety and guilty--into an obligation. A false obligation.

You want to avoid bad feelings. So you transform all this avoidance into obligation; you declare that you have no choice. You're taking orders from the stuff. Because, at some level, you want to. The stuff is your shield against bad feelings, and after avoiding those bad feelings all that time, you don't know if you can handle them.

OK, maybe this isn't true of "you". But it is true of a lot of people. They create the illusion that the stuff is out of control when, again, they're choosing not to control it. So I'm trying really hard to choose to control my stuff.

For example, I'm working on eliminating deep storage in favor of open, handy, displayed storage. The majority of my fabric stash lives in two open shelves in my den, where I can gloat over all the colors and textures. The majority of my perfume lives in three bread boxes on another open shelf, lids usually opened for display and gloating.

I did, admittedly, say "the majority". There's some fabric in bins, and some excess perfume here and there. That needs to go. But having most of it in a defined space makes it perfectly, visibly obvious how much I have. And if I refuse to re-overflow the space, it sets a boundary against future acquisition. It's under control.

Other things aren't under control. Boxes of books. Untidy stacks of sweaters. Too many bath potions. A little pool of shoes. They're not goat-trails hoarder chaos, but they're just not satisfactory. They give me that feeling that they're out of control. They're trying to give me orders. That just won't do.