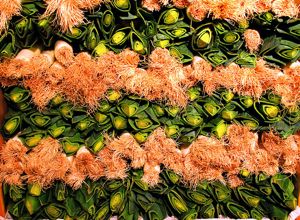 So, since the last farm diary entry, it rained. And rained and rained. It stopped just before the third "and rained", and we haven't had any significant rain for a couple of days. Today would have been a perfectly plausible day to do a little gardening, but I'm still not quite over that cold. Maybe tomorrow. Maybe not. Maybe I'm afraid of mud.

But we did harvest many of the remaining vegetables. About ten pumpkins. Two squashes from seeds called "Red Warty Thing", which fulfilled the promise of their name. Five or six wildly overgrown zucchini, some of them with nice hard shells like winter squash and a pretty two-tone coloring that should look nice as harvest decorations. An odd thing with one elongated end that I think is an immature Red Warty Thing.

And one Copra onion. There are lots more onions but I got lazy. Irritatingly, the onion tops didn't fall, so I'm not sure how well they'll keep.

I didn't start leeks in time, so I ordered a hundred or so American Flag leek seedlings from Peaceful Valley, to plant soon. And three pounds of Yukon Gold potatoes, which will almost certainly freeze to death, but I wanted to give them a try. And from Johnny's, some landscape paper and biodegradable landscape fabric and regular landscape fabric.

Maybe I'd better go get the rest of those onions...

Edited to add: Oh, yeah. I never go to the paths discussion. There wasn't much to it anyway.

I did go get the onions, and they're a puzzlement; even though I took much better care of them this year (last year I barely weeded them at all), the average bulb size is, if anything, a bit smaller. The thick necks can probably be explained by my failure to withhold water when I should, but I don't understand the bulb size. Of course, I was growing them in a different bed, and I planted them too late. I really can't complain until I finally plant them when I should.

I also harvested a couple of dozen assorted peppers. And transplanted ten or so strawberry plants to the far end of the future strawberry bed, so that we can see how they take to my rough-and-ruthless transplanting process, and to being transplanted in the cold.