Rambling: Perfume and Other Stuff 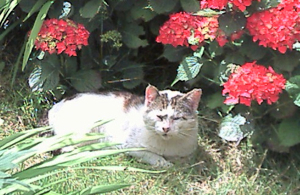 Once again, It's Been Long Enough since I last posted, so I'm going to ramble. Randomly. Hopefully not entirely incoherently. Though you never know.

I've been wearing Girl Clothes lately. Linen shirts, skirts, little black flats. Even a piece of jewelry once or twice. (I bought myself a little green rhinestone-speckled frog, for example. Shopping morale.) So I accompanied them with Girl Perfume.

I wore Chanel Cristalle the other day. I always thought of it as a sweeter, lighter, laughing version of No. 19, but this time I could finally see why some people find it stern and hard to warm up to.  Not that I don't adore it, it's just that I can at least imagine that perception now.

A few days later, I wore Hermes Hiris. I didn't consciously smell it after I put it on, but it gave me that well-enveloped well-dressed grown-up feeling.

And day before yesterday, it was Balmain Ivoire, warm tangy very expensive soap. I think that the modern Ivoire, as purchased at discounters, may have the best quality-per-dollar quotient of any perfume. If I'd ever smelled the original I might not feel that way. But then again I found the modern Vent Vert to be merely blandly pleasing even before I smelled the vintage, so I think that Ivoire is indeed impressive. (I should note that I bought my Ivoire two to three years ago; I only hope that the current version is the same.)

For the past two years I've been participating in the 100+ Reading Challenge. This year I'm not, and I conclude that for me, the Challenge was counterproductive. When I'm participating, I feel a pressure to finish books, and to read the whole book, and that feels too much like a job. It makes me choose my books more carefully, and suppresses my usual strategy of picking up an old favorite for a chapter or three when a new book isn't quite what I want at that moment. The net result seems to be that I read less.

The down side is that when I'm not participating, I don't remember what I've read. If it's an eBook (see my guilty post here about those), of course I have a record, but if it's a paper book I tend to lose track. And then I sell the paper book, and I really lose track.

The sewing continues. As I sloooowly get patterns fitted, I find myself thinking more and more about buying a serger. Or an overlock machine. Or whatever it's most commonly called. I like the idea of having a sure-fire pattern that I can just cut and sew and press and wear without a lot of fuss and fitting. On the other hand, I strongly suspect that if it came down to it, I'd find that boring. So I'm waiting a little longer for the serger. Probably.


Remember The Farm? I didn't do a lot of weeding over the winter. OK, I didn't do any weeding over the winter. The good news is that an alfalfa-straw mulch does a startlingly good job of suppressing weeds. The bad news is that we only covered a tiny fraction of the garden space with alfalfa straw. Oh, and we covered some of it with black plastic, hoping to suppress Bermuda grass. But the rest of the garden is distinguishable from a lawn primarily by the fact that the "grass" is taller and has seed heads. There's going to be a lot of fork-and-shake-out-the-clods. Except in the perennials where forking is not an option; there I'll just pull weeds until my fingers fall off. Whee!

But the garlic and potato onions look healthy. Yay! And I'm preparing space to plant the next crop of Copra Onions, this time getting them in before the day that they're supposed to start bulbing. And the strawberries and blueberries are blooming, even if they are crowded by weeds. So we'll be eating.