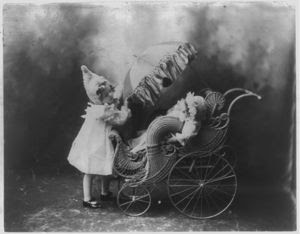 Remember When Harry Met Sally? Of course you do. Marie, Carrie Fisher's character, was dating a married man and waiting for him to leave his wife. People kept telling Marie that that would never happen, and Marie kept groaning, "You're right, you're right, I know you're right."

I keep wanting to write about Mom. And I keep telling myself not to. Because I don't have the impulse to write about all the good things that they talked about at the funeral. What keeps coming back to me is the Mom who wasn't interested in me.

I want to write about the failed struggles to have even two minutes of conversation with Mom that was about me, instead of her. And the times that I talked about myself as fast as I possibly could, because if I let her get a word in edgewise, she'd change the subject to herself, and I just didn't want that to happen yet.

And the resolution that I wasn't going to try again. Just pick up the phone, let her talk about herself for five minutes, make an excuse, and hang up. What's so hard? She will never be interested in you. Got that? Never. Ever. Not gonna happen, no way no how. Are you listening?

But I could never do it. I complained. I argued. Somebody doesn't complain and argue unless they have hope for change. And when I complained about Mom's behavior with regard to me, that conversation was about Mom, so Mom participated in it. But it was also about me, just a little bit, and I guess that's why I couldn't stop starting those conversations. Mom would participate, and promise to take an interest in me, and I'd test the waters by talking about something about me that wasn't also tightly linked with her... and in thirty seconds we were talking about her.

She always insisted that we weren't. Stories about her childhood? "But he's your cousin, too! That's about you!" The latest thing that someone at church said to her? "But you used to go to that church! That's about you!" I'd try to shift to a movie I went to; that's really about the movie, not me, right? "Did I ever tell you about when I used to work as an usher at a movie theater?"

I don't mean that it was wrong for her to talk about herself. I mean that once in a while, even once in a long while, couldn't we talk about me? Y'know, for maybe three or four conversational exchanges? Two minutes? Ninety seconds? Couldn't we?

I think back, remembering when I was a teenager and Mom and I used to sit at the kitchen table and eat Sunday pastries and margarine. I remember those conversations rather fondly. I remember Mom talking about her love for daffodils, and how her father used to have her deadhead his roses when he was out of town, and her fondness for marzipan, and her religious philosophy, and her opinions about mass transit.

I don't remember talking about my schoolwork. Or the latest book I was reading. Or the Doctor Who episode from last week. Or my friends. Well, I didn't have friends, but I don't think Mom knew that. It's not the kind of thing that she would have noticed.

You see why I shouldn't write about this? But apparently I am anyway.