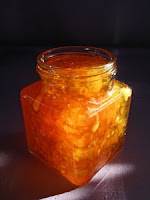 Once upon a time there was a cat that was hungry. All the time.

He ate his Friskies, but he was still hungry.

He ate his kibble, but he was still hungry.

When his people were gone after breakfast, he jumped up on the kitchen counter and ate the leftover eggs and bacon and syrup-soaked pancakes and everything but the marmalade, but he was still hungry.

He came back later and ate the marmalade. He was still hungry.

He walked around the house with sticky-marmalade paws, and howled.

The neighbors complained and his people cleaned up the marmalade and took him to the cat doctor and the cat doctor said, "He's fine. Put him on a diet."

The cat was given no Friskies and half as much kibble and the breakfast dishes were washed clean and shining every morning, and the cat ate all his kibble and howled.

The neighbors complained and the cat's people locked the cat in the basement laundry room with clean water and half a cup of kibble and a soft throw rug and three cushions and the heat on just the way the cat liked it and two catnip mice and a bouncy-spring cat toy and NPR on the radio so the cat could hear voices. They petted him and told him stories every day before they went to work. And the cat ate all his kibble and the insides of both catnip mice and lay down against the bouncy-spring cat toy and howled. But no one could hear him, so the neighbors were happy.

On a Thursday, during Talk Of The Nation, the cat smelled something better than kibble or even Friskies. He looked up and he saw a mouse sniffing at the kibble bowl. And the mouse was what smelled better than Friskies.

The cat had never seen Friskies or kibble or eggs or even marmalade move. He felt a twitching in his paws and his stomach growled and his legs wanted to spring, and he watched the good-smelling mouse as it circled the kibble bowl and sniffed at the catnip-mouse carcasses and peered over the water bowl and took a lap of water. And then the mouse scurried to a crack under the baseboard and squeezed his head and his hindquarters and his tail underneath and the mouse disappeared.

And the cat sprang and scrabbled at the crack under the baseboard and sniffed the better-than-Friskies smell. And the cat howled.

It wasn't until the next Tuesday, during Fresh Air, that the cat smelled the better-than-Friskies smell again. The cat hid behind the Tide box and held very still and watched the good-smelling mouse snatch a crumb of kibble from under the dryer where the cat had been unable to reach it. The mouse ran with the crumb to the crack under the baseboard and squeezed his head and his hindquarters and his tail underneath and disappeared. And the cat twitched, but he did not spring or scrabble or howl.

On Thursday, the cat didn't eat the piece of kibble until Echoes came on. And then he attacked the bouncy-spring cat toy and tore its feathery head to pieces and lay down on the feathers and howled.

On Friday the cat was watching the piece of kibble during a pledge break when he smelled the better-than-Friskies smell. He hid behind the dryer and watched as the mouse squeezed under the crack into the laundry room. The mouse sat by the crack, and sniffed the air, and groomed his tail, and sat some more. And finally the mouse ran to the kibble bowl and scrabbled up its outside and down its inside and snatched the piece of kibble and tried to scrabble back up the inside and slid down and tried again and then he saw the cat above him and he squeaked and tried to hide under the piece of kibble.

The cat leaned into the bowl and licked the mouse's good-smelling fur until the mouse was neat and smooth, and then he lifted his head and admired the mouse.

And the damp mouse lay on the bottom of the bowl and pretended to be dead. His fur dried and the cat didn't go away and the mouse finally got up and ate his piece of kibble and the cat's legs twitched but the cat didn't spring. And the cat watched as the mouse ran at the side of the bowl and slid down, and ran at it again and scrambled over the edge, and ran to the crack under the baseboard and squeezed his head and his hindquarters and his tail underneath and disappeared.

And the cat lay down on the three cushions and he had a nap.

And the next day the cat left three pieces of kibble in the bowl, and during the weather report the mouse squeezed under the crack into the room and sat and sat, and groomed his tail, and finally ran to the bowl and climbed in and ate the kibble as fast as he could. And the cat groomed the mouse again and the mouse scrambled out of the bowl and went home.

From then on the mouse came every day. Sometimes he would stay and play until the end of All Songs Considered. And the mouse got fatter and the cat stopped howling and his people opened the laundry room door, and the mouse had children and his children had children, and the cat hardly ever ate any of them. And the rest of them lived happily ever after.