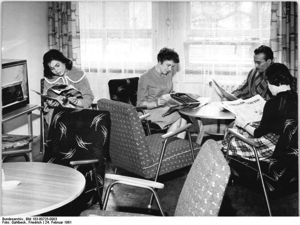 (Well, "story" may be an overstatement.)

"She's writing in this children's story style, all 'once upon a time'," said Henry.

"She's even saying the phrase. I mean, word for word," said Emily.

"We're taking turns. Back and forth. Forth and back. Blah and blah and then you say blah," said Henry.

"Well, we do live in her head," said Emily. "That's how it works. It's probably just a phase, and anyway, she hasn't written about us in months; I'm pretty much happy just to be talking."

"I'm not," said Henry. "We were on our way to being a book. That was the plan, right? You and me and your aunt--well, it's too bad she had to die, but still--and the house and it was getting nicely surreal. And now we're all...meta. Breaking the fourth wall and all that. That's not good for a character's survival."

"Dave and Maddie started doing it a lot, toward the end of Moonlighting."

"Yeah. Toward the end. How does this not support my point?"

"I guess it does. You think there's any way to break out of it?"

"I don't know. She's started cutting those endless dialogue attributions, anyway. I mean, there's no 'said Henry' after this. Is that a good or bad sign?"

"It might mean that we don't fit in the fairy tale format. But if she's writing fairy tales, that's not a good thing."

Henry said, "I'm going to find a comfortable chair. It may be a while."