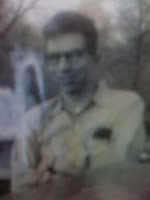 There's a picture of my late father, taken probably early in my parents' marriage. To me, he looks young and glamorous and amused and, most of all, angry. I call it the "ya wanna make something of it?" picture. At some point, I learned that it was taken by his mother-in-law. While I was very fond of my grandmother, I remember my father's feelings about his inlaws, and therefore I understand the expression on his face.

There's a picture of my mother, too, the engagement glamor shot that was in the newspaper. She's beautiful, but when I look at that picture I don't feel that I know her. It doesn't have the burst of life that I get from my father's picture. I find myself wanting older pictures, from when she was in high school, or grade school. I find myself wondering if perhaps only a picture of my mother as a toddler would show her as a person that I feel that I could know. There's always been a distance about Mom, a facade that kept me from seeing her and, I think, kept her from seeing me. She went behind that wall long, long ago, and she never came out again. 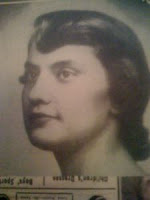 Last night I dreamed about my father. He had dark hair and wore a fine Gatsbyish summer suit, and he had the youth and confidence of that old photo. Except he wasn't angry in the dream; he was amused and exuberant in a way that I never remember seeing him in life. He was performing some task, some duty that he was happy to do. And he was driving; the duty involved a car journey.

Mom's been sick, very sick, and I remember waking up and thinking, "If she died last night, a sentimental person would think that he was coming to pick her up." Not, no, in the sense of a reunion of true love; they never got along, at least not in my memory. But she never could take big steps without somebody's help, and he was always driving her places. If there's somewhere to go after you die, I can certainly imagine him giving her a ride there.

And then I learned that, yes, Mom died last night. I'm writing this on the plane. It's sentimental, and I hate it when I'm sentimental, but I'm imagining the two of them on their way somewhere. He'll drop her off and get her settled, and someone will take care of her and comfort her like the frightened child that she's always been. She'll have her chance to fix whatever it was that kept her from fully inhabiting her life or knowing the people in it, to wash out the anger and to ease the relentless emotional hunger that never seemed to leave her any peace.

Well, I claimed that this wasn't fiction. Does that mean that I believe that ending to this story? I don't know. But I like it.

Photos: Mom and Dad
Posted by Martha at 3:53 PM