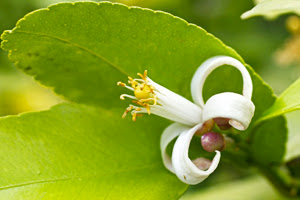 I may have found my orange blossom.

I've compared orange blossom to a continuous soundtrack of Shirley Temple laughing--delightful for about fifteen seconds, and then I want to run away, holding my ears. Or in the case of orange blossom, my nose.

But hb01 may be the exception. It's lower pitched than most orange blossom fragrances, tangy without being shrill, creamy shifting to powdery rather than transparent. There's a vaguely foody element that's probably the fruit and vanilla, but I don't actually perceive any fruit.

The notes list does sound pretty good for my nose:

If a fragrance must have fruit, black currant and peach are some of the best fruits to have. Vanilla and cedar and sandalwood seem good for countering shrill flowers. The bergamot and "green leaves" could add that tangy, green edge. And all those other flowers are presumably crowding around the orange blossom, distracting it out of its annoying ways.

So, it's good. And it's feminine, terribly feminine, in a grown-up way--while it's perfectly respectable and wouldn't seem improper on a teenager, it would nevertheless seem odd, as if that teenager were wearing a Balenciaga suit. It wants me to dress and groom to live up to it, and I suspect that it's less flexible on that issue than sweet tolerant Jasmine White Moss.

The only flaw is the drydown. Not that I don't like the drydown--I love it. It's a beautiful creamy remnant of the vanilla and sandalwood and the mellowest parts of the flowers. But it's just a little too close to the drydown of Serge Lutens Un Lys, already in my collection, so I may conclude that it's redundant.

But it is so very lovely that I may, instead, conclude that I don't care.

I forgot the Review Roundup! PereDePierre and Basenotes and Fragrantica and surely there must be more?