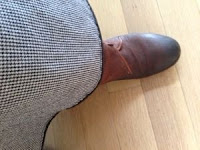 This post was going to be about Papillon Salome. Salome is glorious. It's also hard to put words to. Well, it's hard to put PG-rated words to. Y'know? And this is a pretty PG blog.

So apparently no Salome review today. But I enjoyed it, from the shocking top notes to the final sweet, powdery, but still distinctly animalic drydown.

(I could make up for it next round with a 'soapy' theme.)

And there is no NaNoWriMo update to speak of. I suspect that my NaNoWriMo experience this year is going to collapse to no more than, "Try to write more than usual in November." 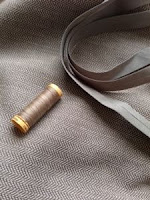 I Dressed again. I've been wearing the skirt in the first photo, a black-and-white denim-weight cotton houndstooth with a hem bound in black bias binding, a lot. Over and over and over. And over. So I bought the fabric to make another one, this one a tan-and-white denim-weight cotton herringbone, with a hem bound in tan bias binding.

From a distance, they're just going to look gray and beige, but I know that they have pretty woven patterns, see? I have another one in a tiny-black-and-white-pattern in wool, and more pieces of assorted tiny-patterns in the fabric stash. I'll have a whole collection of tiny-pattern skirts.

I haven't had a Coke in...er...four days? Five? So it's not surprising that I'm being stalked by a migraine. I'm trying to drown it in iced tea.

I've been trying to Tweet more, because I'm trying to understand Twitter. Just because. I couldn't really tell you why.