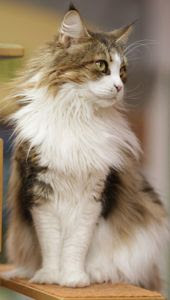 I just made Swedish pancakes.

I did eat some broccoli with the chicken. That makes it all OK, right?

It's raining out there.

I was going to finish making a skirt this weekend.

Oops. I was also going to plant the French grey shallots.

But the rain is an excuse for not doing that, right?

I've been thinking of learning how to make pot roast. But that wold be unhealthy.

I bought more rhinestones. And a cool pin that looks sort of like a metallic Tribble.

That's a Maine Coon. The cat, that is. The one with the sort of Bugs-Bunny expression. If we get a cat again, I want it to be a Maine Coon.

I dug out the pieces of that skirt so far, and was startled to realize that it's made of wool crepe instead of denim. A person should really remember these things. It's wool crepe that I've had for years and years. It seemed like time to do something with it. I remember my thinking now that I have the (partial) skirt in hand.

I bought a couple of hundred yards of bias binding in assorted colors, and thirty yards of black twill tape, when we were in Portland. Because it's harder to find that stuff in Ashland. I'm hoping that the result will be that I knock off some skirts. I prefer bound hems.

I already have the Gored Skirt Grail that I can make that fast--assuming that I didn't spoil the pattern last time I re-traced it. It was a patchwork of cut pieces and masking tape from all the alterations. I'm pretty sure I traced exactly precisely the pattern from the last successful one that I made, but with the tape giving way and pieces of pieces falling on the floor, and with Version I and Version II and Version III floating around, it's hard to tell for sure.

The Casual Shirt Grail requires (1) no collar, because I can't finish a shirt with a collar, even a simple collar without a stand, in three hours. And (2) not-set-in sleeves, because I have yet to solve my tilted shoulder problem, plus set-in sleeves are precise enough that I suspect I'd be doing a little tweaking with each different fabric. And (3) no required buttons. When this pattern is right, I want to be able to cut and sew it without even needing to try it on.

The goal (Huh. This post is starting to narrow down to a topic here) is to have a reasonably flattering shirt pattern that's so easy that I have spare attention for embellishments. Piping, binding, contrasting stitched-down facing, beading, embroidery, decorative buttons--not, I promise, all on the same garment.

I'm looking at a vintage 1950's swing coat with a gorgeous fur collar and wondering if making something with really high-quality fake fur would end with people spitting on me and throwing red paint at me. I guess the more obviously fake the fur is, the less likely that would be to happen, but I want things that look more convincingly first-half-of-the-twentieth-century.

Meanwhile, I do have a really nice-looking swing coat pattern.