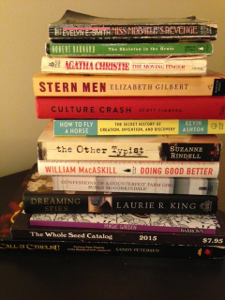 So, I always intend to blog about my reading. Book reviews and stuff. And as a sort of reading diary. But I never do.

Today I was looking at that stack of books on Desk Two, and I took a picture.

So what's in the stack?

That one on the bottom is the main rule book for Sandy Petersen's Call of Cthulhu roleplaying game. It was very exciting when it was available in hardback, oh boy! It's the third edition.  When they were still doing percentile rolls instead of whatever weird thing they switched to. Yes, I do remember the game mechanics of a game that I haven't played in over a decade; is there a problem with that?

Two and a half decades?

I loved Call of Cthulhu. I loved roleplaying. Himself introduced me to it in college, and we kept it up for a while, and then it just petered out, but I still remember it ever so fondly. I doubt that it's on my desk because I was actually using it; I was probably using it as a hard surface to write on or something. But that means it's still on the active shelves, because seeing it there makes me happy.

I love Laurie King's books. The Beekeeper's Apprentice, with Holmes and Russell, should be one of my comfort bathtub paperbacks like the battered books that you see on the top of the stack. Now that I think of that I think I'm going to go get a paperback copy. And I loved the next one in that series and the next one, and the next one....and I love her other books. But...

I mention this to explain why I couldn't enjoy Dreaming Spies. It starts at a particular point in time in the fictional world, and then moves back to a time previous to that fictional time, and I spent the Whole Bleeping Book in let's-get-this-over-with mode. I had the same problem with the sequel to Stephen Baxter's Flood. Ark, that was it. You'd think that this problem would recede in re-reading the book (because I re-read books, including mysteries) but I suspect not.

I don't have that problem with movies. I don't know why.

Confessions of a Counterfeit Farm Girl (Susan McCorkindale) is about a Thin Lady who moved to a farm. It's amusing, it's well-written, I can't identify with Thin Ladies one bit. It didn't work for me. I bought this in a period where I was buying all sorts of back-to-the-country memoirs and urban homesteading books. I may go back to that when spring comes and the seed catalogs arrive and my simple farm resolutions fall apart, but I'm not in that phase right now.

The first several chapters of Doing Good Better (William MacAskill) were very enjoyable--I enjoy a well-written argument, and I really enjoy the elegant destruction of irrational beliefs, or elegant "why didn't I think of that?" discoveries. Who knew (spoiler?) that the best way to improve schooling in a specific community isn't books or school supplies, but deworming pills distributed by the teachers so that the kids have fewer sick days? It makes sense when I think it through, but who saw it coming? I love stuff like that.

Then it gets practical. It wouldn't be serving its purpose if it weren't practical, but apparently I wasn't ready to switch from enjoyment to useful information. I'll read it again when I am. Meanwhile, I'm just taking away the lesson that, yes, the best way to help the world, for me, is to make more money and donate some of it.

The Other Typist (Suzanne Rindell) started out very interesting, and then I got busy. I suspect I'll be reading it over Christmas, though I may pack it for Thanksgiving weekend. I did realize, however, that there's a comfort factor in the structure of a murder mystery--I have a fair idea of how a mystery is going to go. By contrast, I have no idea how The Other Typist is going to go. I don't know if the bad people will get their comeuppance. I don't know if the good people will survive. I don't know anything. We'll see how it goes.

How to Fly a Horse (Kevin Ashton) is part of a recent focus on creativity, along with Culture Crash above it, and Big Magic over on Desk One and therefore not in the photograph, and Being Wrong by Kathryn Schulz. (Why do I include that one in the group? I don't know. Yes, I do--I think that it shares some facts and stories with other members of the group, possibly How to Fly a Horse, and because I loved the author's Ted Talk, as I loved Elizabeth Gilbert's Ted Talk. See? Don't worry, no, it doesn't make sense.) There are, no doubt, more that I'm forgetting, probably on Desk One. It was a lot of fun--one of those books that has me annoying other people by throwing little passages and facts at them. Himself isn't crazy about that habit of mine.

I've barely started Culture Crash. It was making me feel sad and cynical, and I ran away to the happier Big Magic. In my brain, the two are in opposition, because Culture Crash laments the fact that no one is getting paid to create any more, and Big Magic advises the creator not to count on getting paid to create. But I don't think that those arguments are really in opposition, because one is societal and the other is individual. I'll dig into Culture Crash again soon.

Speaking of Big Magic, Stern Men is my "stop fangirling and read one of her books, dangit!" Elizabeth Gilbert novel. I've only read a single page of the prologue, which had the effect of reassuring me that it's OK to write narrative and not just scene. That's all. Another likely Thanksgiving or Christmas book.

Hmm. I'm listening to yet another Podcast with Elizabeth Gilbert (this one for the New York Public Library, with Ann Patchett) and she mentions that she wrote for magazines. Which reminds me that my favorite authors tend to have also been journalists. So I hope I'll like Stern Men.

Then there are two bathtub comfort books near the top. The Moving Finger is one of my favorite Agatha Christies--I think that the only one I like better is The Pale Horse. I'm not that interested in the mystery--it's all about the characters, and the nice little un-angsty romance that Agatha Christie is so good at.

The Skeleton in the Grass (Robert Barnard) is, again, a cast of engaging amusing characters, but it doesn't just let you bask in sweet nostalgia; it questions.

Miss Melville's Revenge (Evelyn E. Smith) isn't my favorite Miss Melville novel; that's the first one. But I found it when sorting books, said, "Ooh! This one!" and it's been in the bathtub-book place of honor since. Waiting for the bubble bath. (The bubble bath came just the other day. Himself keeps me in bubble bath. There's a giant, giant jug of my favorite bubble scent, Cranky Baby (aka California Baby Overtired & Cranky) in the bathroom.)