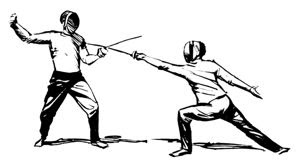 So, I finished reading Elizabeth Gilbert's(*) Big Magic. I bought it because I loved her TED talk on genius as an entity separate from a creator. I loved Big Magic just as much, though I can feel that there's a battle in my head, between my natural cynicism and the positive messages of the book. Cranky and Inspirational are dancing around the ring, taking shots at each other.

Inspirational made it into the ring partly because the positive messages in the book aren't determinedly oblivious, shovel-in-another-spoon-of-sugar, unicorn-breath messages. Gilbert doesn't assure you that if you take risks, quit your job, follow your passion, blah de blah, you'll be just fine. In fact, she recommends keeping your day job. She doesn't tell you that your creativity will fight your battles and keep you fed; she urges you to protect and feed and support your creativity, even though it may never feed you, may never do anything but keep you company and give you a shot at more joy in your life. She doesn't assure you that you'll create anything world-shaking, or beautiful, or even good. But still, that joy thing.

No unicorns. I like that. Even though I dislike "inspirational." I dislike the word. I dislike the concept. It makes me twitch. But it's still in the fight, holding its own against my cynicism. Not that she used the word, at least not that I particularly noticed. But there's a vibe that needs a word, and that word keeps popping up in my head.

It's my mother that inserted the word in my head. She loved that word. If you read my blog, you know some of how I feel about my mother. Elizabeth Gilbert, on the other hand, likes her mother.  Maybe that's part of the difference. Maybe a supportive mother is a natural brake on cynicism. Maybe it allows positive ideas that don't smell like unicorn and don't feel like denial.

Is it wrong that I'm relieved that Elizabeth Gilbert doesn't want to be a mother? Some distance from the idea of the mother as the font of all good things is...good.

I love the TED talk. I love the book. I bought Stern Men, one of Gilbert's novels. (My cynicism just wouldn't allow me to buy anything as popular as Eat Pray Love. Maybe later.) I subscribed to Magic Lessons, Gilbert's podcast. I'm Googling for videos of Gilbert's various talks. I'm sensing fangirl tendencies in myself. This must be controlled.

But all the same, I love Gilbert's concept of an idea as something that has its own separate existence, that seeks a person to carry it out--and that eventually, if it's neglected, moves on to find another person, leaving a dead husk behind. (OK, I don't know if "dead husk" is hers or if it's a product of my crankier view.) She has me thinking of my five (count 'em, five) ideas for books--three novels and two nonfiction--and wondering which one I want to tend and feed and keep alive. Because I can't manage a litter.

Maybe she's (twitch) "inspiring" me to commit to writing one of my dark, cynical ideas. That would be cool.

Image: Wikimedia Commons.
Posted by Martha at 12:34 AM