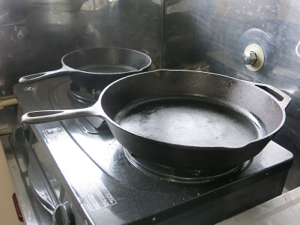 So, when I first created this blog, I thought that there would be some chicken involved. That is, fried chicken. But aside from the kinda-recipe in the very first post, there's been very little chicken talk.

Now, classic fried chicken, in my view, is bone in, skin on, dusted/dredged with flour and not too much pepper, and pan fried. But that doesn't mean that there isn't plenty of other very fine chicken out there, some of it where you wouldn't expect. For example, who would have thought that the Medford Food4Less would have some pretty good chicken? How could you know, if you're not told, that the crust on the skinless "put a bird on it" chicken at The Original in Portland has some weird magical ingredient that makes it taste rather as if it isn't skinless? And how would you know that their evening fried chicken entree, while quite good, is an altogether different fried chicken?

The public has a right to know.

I've been debating just how to present the information, though. A chart, so you can scan across and check out just the (for example) bone-in entries? Just reviews, like perfume reviews? A cross between the two?

I'm thinking of the cross between the two--an index, and if I get around to writing a full review, I'd link to it. The index would have entries like:

Smithfield's: Chicken pieces, bone in, skin on, light breading, no excess added flavorings, incredibly moist white meat, and you can get chicken as a side! Recommended.

Tot: Wings, bone in, skin on, no breading, medium spicy sauce, juicy meat. If you crave plain fried wings, they can leave off the sauce. Recommended. Use caution if you're a spice wimp like me.

Does that work? What else does a chicken addict want to know?