Long ago, I blogged a daily Scent of the Day post every single day for...er...a while. I have it in my head that I did was over a hundred days, but I suspect that I made that up. This Sunday (in, yet again, BlogChat) I remembered that and half-resolved to start blogging every day again--not necessarily about perfume, just about stuff. That was three days ago, and I haven't posted yet. So much for resolutions.

But I could still give it a try.

I occasionally theorize that the gotta-add-a-picture factor slows down blogging. The need for a picture seems vaguely silly--it's not as if y'all would come here, see a text-only post, and promptly shriek and run away, right? Right? I mean, a good fuzzy cat picture is a fine thing, but it's not as if it's mandatory

If I skipped the picture, I could even blog from my phone. Maybe. There's some sort of post-by-email thing.

Speaking of writing on my phone, I've been playing with (NAYY) the combination of Daedalus (an iOS app) and Ulysses (a Mac app.)  They're both text editors with bonus features for managing lots of text files, and, since, they're written by the same company, they sync with each other using that cloud thing. So if I have an inspiration for a random ramble while I'm waiting in line at the grocery, I can start to tap it into my phone, and when I get home to my Mac and an actual keyboard, the post fragment is there for me.

Now, the problem with this for general writing purposes is that while I'm perfectly happy to have my blog posts wafting here and there, I'm not as sure about trusting some theoretical future novel to a cloud thing. The very fact that I keep referring to it as a "cloud thing" presumably communicates my uneasiness. There's no logical reason to trust cloud syncing less than I trust email--I should really trust it more--but there it is.

We'll see. Meanwhile, I'm going to tack on a nice cat picture. According to Wikimedia Commons, his name is Noodles. 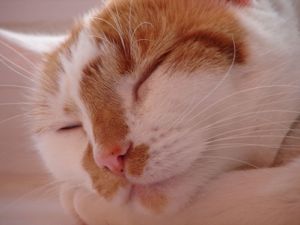 Image: By Antony Stanley. Wikimedia Commons.
Posted by Martha at 12:05 AM