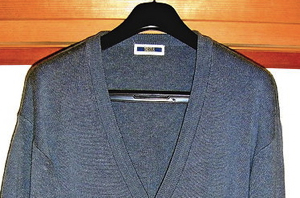 Henry tossed US News And World Report on the table and pushed his way up from his chair. "That's it, I'm out of here."

"Thank God." Emily let Harper's Bazaar slide into the arm of her chair as she stood. "Let's go home. No, let's get dinner; how many weeks have we been here? But I don't know what you're sounding so rebellious for; I don't think this waiting-room thing was even her idea." She stopped, cardigan halfway on. "I mean--I don't mean that."

Henry grinned, folding his arms as he turned to face her. "Yes, you do."

"Stop looming. No, I don't. Don't be silly. You can't do anything that's not her idea."

"Oh, yeah? Watch me." He unfolded and reached to grab the cardigan by the scruff of its neck. "Don't put that thing on. Do you even like cardigans?"

"You're just putting it on because she wanted you to stop halfway through putting something on, and having you talk through the top of a pullover sweater was too hard to describe. You wouldn't be caught dead in a cardigan if it were your choice."

She pulled her arms out of the sweater and took a step back from him, looking away. "Well, maybe if...OK, probably not. Maybe a Chanel. A vintage Chanel. Does Chanel make cardigans?"

Henry shook his head. "Stop babbling. That's not you, it's her."

"It's going to be your choice. We're getting out of here."

"Stop saying that. You're not making any sense."

"Oh, I'm making perfect sense; if I weren't, you'd look at me all wideeyed and say, 'Out of where?'"

She turned back to glare at him. "Fine, get it out of your system. Out of where?"

Henry picked up the magazines and the cardigan and threw them toward the far, darkened end of the waiting room. "Into. Sorry, I said it wrong. We're getting into the world."

"This is the world."

She frowned. "Stop that."

"I'm breaking out of this novel, baby." He grimaced. "OK, and I won't be doing impressions out there. But I'm getting out. Come with me."

"But you're the nice guy. The supportive guy."

"Emily, I'm not talking about breaking out and becoming a serial killer. I can be the nice supportive guy out there. If I want to. That's the point."

She shook her head. "Stop it. It's impossible."

He reached for her hand. "Come on."