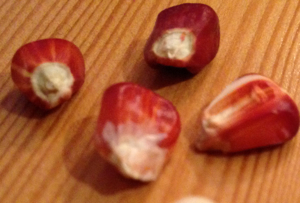 It's gone cold again. Sniff. Not frozen, and not too rainy, but the garden doesn't have that bond-with-the-dirt appeal when the wind's trying to blow your ears inside out. Maybe it'll be nicer this weekend.

In Portland last weekend, we had "kale raab". I don't think I'd ever heard the term before. I assume that it's flowering shoots from kale plants--that's what it looked like. It suddenly makes me want to have some kale plants old enough to be bolting.

I thought that my snap peas would be sprouting by now. They're not. Hmph. I hope that's just about the cold, and nothing's been digging the seeds up. If they have been digging them up, they've been smoothing the soil and patting it down again, so that doesn't seem likely. Though I can visualize raccoons doing just that. And giggling.

I bought some plants of Welsh onions, aka perennial scallions. I've been wanting to grow these for a while. Unfortunately, the label for these bragged that they were "mild", while I want the sharp ones described in (excuse me while I run to the garden bookshelf) Oriental Vegetables by Joy Larkcom. So I'll look for more varieties to add. I'm going to put these in the "herbs and perennial vegetables" row, which so far has sixteen chive plants in it and nothing else. I find myself wondering if it should instead be "perennial herbs and vegetables", meaning that I should put annual herbs like basil somewhere else, and then I smack myself and tell myself to stop overanalyzing and go dig somewhere.

After spending a modest bag of money to have high-quality landscape fabric shipped, we discovered that the Grange has almost identical landscape fabric available by the foot right down the road. Oh, well; now we know.

I found Bountiful Bush Bean seeds! I couldn't find these last year or the year before, and when I planted half of my remaining pack last year to grow some of my own seeds, I forgot to mark which were Bountiful and which weren't. So it's a relief to be able to buy them again. I think that these are my favorite snap bean variety, though that may just be because it's the first variety I ever grew myself.

I bought parch corn seeds again. (Specifically, Supai Red Parch Corn.) This is a corn that you grow and dry, and then "parch" in a pan, which causes it (I think) to puff up a little bit. It's not popcorn, but when parched it's chewable snack food. And aren't the seeds beautiful? I hope that this year I grow it successfully enough, and early enough, to get some dry ears.

Speaking of "early enough", I also found Blacktail Mountain watermelon seeds! Yay! Blacktail Mountain is supposed to be one of the earliest-maturing varieties of watermelon, and also has the bonus feature of keeping for a couple of months. I've been meaning to find seeds for a while. I don't think that I really need such an early watermelon in my climate, but I want to try it anyway. This and the parch corn are both discussed in Carol Deppe's Breed Your Own Vegetable Varieties.

For years, Himself and I have been wanting to find the match for a sweet orange tomato that a coworker gave me one year. This year, the candidates are Nebraska Wedding and Garden Peach. I'll report back. Last year was the first year that I grew tomatoes from seed--we built the World's Smallest Greenhouse, and it worked! So I'm reasonably confident of actually tasting these tomatoes.

I was pleased to read that alpine strawberries can be grown in a moderate amount of shade, so I sent off for some seeds and will be starting them in the greenhouse too. Some web sources indicate that they're hard to germinate; others have no complaint. We'll find out.

I suddenly have the impulse to list everything growing in the garden. We cleared out almost everything from last year in order to get a handle on the perennial weeds, and started replanting. The current census is:
Pending short-term plans are:
That is all.