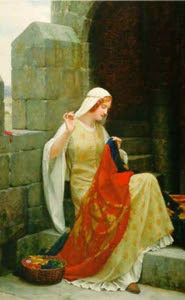 So, the SWAP is toddling along.

The six-gore black wool blend skirt (Burda 8973, lengthened, minus lining) is three-quarters assembled. I love the serger--without it, I'd have been sewing seven seams and finishing fourteen raw edges. With it, I used the five-thread safety stitch, knife (gulp) on, and shot through seven seams in less than an hour. Foom!

Well, OK, there was the entire gore that I left out. When I tried the skirt on I thought that I'd re-gained some of the weight I'd lost last year, and put the partially completed skirt away for when I lost it again. Then I sat down to watch TV and wondered what that scrap of black fabric was...oh. So, I had to cut out a seam and add it; luckily the skirt was then loose enough to support the lost seam allowance. (I didn't regain the weight! Yay!) Then I did a dubious job of applying the zipper, but in matte black I think that the flaws will be invisible. Mostly. I wear my shirts untucked anyway. Now it's waiting for a waistband and a hem.

For the hem, I'm going to try a coverstitch, which worked beautifully on the same skirt in black linen. A lighter-weight black linen version of the Princess Frankendress is also waiting for a coverstitched hem. But re-threading the machine for another function requires thinking. So I'm going to stitch up the already-cut grass-green Liberty Shirt (re-threading for another color requires less thought) and anything else that's ready to go, before I do that.

I'll be curious to see how the Princess Frankendress works when worn, though it has construction flaws--the waist ended up being a good deal looser than I intended, and I committed an error in the front placket that makes it lie a little funny. In any case, this isn't The Dress, the tried-and-true make-a-dozen-times dress pattern that I've been working toward. It's a little too much like the dresses that I used to wear in high school. I want something else.

The something else might be Burda 7446, a fitted (princess front; darted back) dress with raglan sleeves and inverted pleats in the back of the skirt and a slightly turtley neck. The turtleneckness won't work for summer, but otherwise I like all of those things. It has shoulder pads, which I don't like at all; I'll need to read up on how to alter the pattern to eliminate them. Assuming that I can. I recently bought a fitted raglan sleeve jacket in a fuzzy slightly stretch wool, and I'd be happy if I can get this dress to fit the same way.