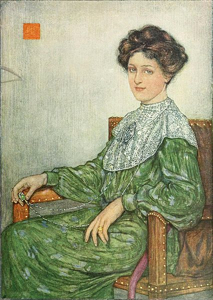 So, at lunchtime I was in Prize, a lovely local store mentioned in my sadly outdated Ashland Fume Scout post. Next to the candy were some roll-on perfumes from a company named Royal Apothic. I rolled a streak of the one called Green Tea on my hand, bought my usual almond-sea-salt chocolate tile, and ran away. I didn't even check the price, but a Google search tells me that it's probably under twenty dollars and that this brand is sold at Anthropologie, among other places.

Green Tea started out sweet and, yes, tealike--tea with a fair bit of sugar and an unidentifiable richer sweet note that I can't quite place. Stone fruit? No, or at least not very ripe stone fruit. Bergamot? No, but it could be bergamot's second cousin. I guess, really, it's just green tea, but I perceive it as separate from the note that I read as "tea". At this phase, I persuaded Himself to sniff and he gave it his second-best rating, which is that it didn't offend him. He noted with approval that it didn't smell of aldehydes or alcohol.

Green Tea is reliably pleasing, without any weirdness. Those are characteristics that usually bore me, but it does have some personality, quirks that appeal to my weird-loving heart.  As it dries down, it maintains a little tension between (mostly) sweet and (a little) bitter, rather than frantically spraying syrup at me. Once in a while I get a confusing whiff of tangy floral that makes me look around to see what perfume bottle is near, then sniff my hand and say, "Oh!"  It's similar to the way that Luctor et Emergo shifts between Play-Doh and cherries--when one personality is dominant, you find yourself doubting that the other one was ever there. I was initially going to call it linear, but if I don't say that about Luctor et Emergo, I can't say it about Green Tea.

It has very modest projection, while still offering an occasional surprise whiff--just from that one streak on my hand. That makes it a candidate for the "inoffensive but interesting" crowd for wearing to plays, airplanes, and other occasions when other people are trapped near me.  In my collection, that category is currently dominated by Pacifica Tuscan Blood Orange and k. hall Designs Cypress & Cassis, both solids and both flat-out linear, so Green Tea beats them on that point. I rather wish that Green Tea were also a solid, so that I could add it to my no-Ziploc-needed airplane wardrobe.

Hmmm. I Google Royal Apothic and learn that they mainly do home fragrances--as do Pacifica and k. hall Designs.  Does that explain the lack of aggressive projection and the lack of classic note development?

Anyway, I like it. I don't think that I even need to add "for under twenty dollars" though I will say, "as a comfort scent." It's not going to be on my desert island list, but there's a good chance that I'll buy one, and if you're less addicted to weird than me, you may like it even better.