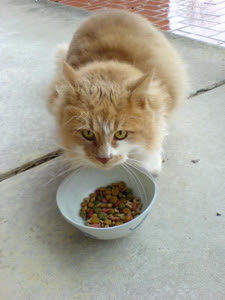 So, this is one of those times when I decide it's been long enough since I posted, and I'm going to post. Whether I have anything to say or not. On those occasions, often my first action is to find the cat picture that will, of course, accompany the post. I'm particularly fond of this one. I'm not sure what the cat is saying, but I'm quite sure that he's not in a good mood about it.

Yesterday was Last Saturday, which means spending money. Well, the spending money isn't mandatory, but in theory all optional purchases have been pent up since last Last Saturday, so the odds of zero spending are low. In practice, I seem to have fallen off the Last Saturday wagon lately. But all the same, I bought a cut of silk/hemp charmeuse fabric in a lovely dark red. It looks terribly dressy, and the hemp should make it much more sewable than pure silk charmeuse. I longed for the same fabric in black, but managed not to buy it. Yet.

The fabric would be perfect for my first creation of a little Mad Men style lined sheath dress, if I were that kind of person, which I am not. I'm looking at the idea of becoming that sort of person with a slightly wistful air rather than the horrified one that I would have had five years ago. But I'm not there yet, so my current plan is to sew the piece up into a dressy-jacket version of the Sewing Workshop Liberty Shirt. That plan might actually happen.

By the way, Himself has posted his second post about our Portland and Bay Area tour of gluttony. He made me hungry. And here's the first post if you never caught my earlier reference to it.

Speaking of Portland, it's interesting that after more than twenty years of living in the Bay Area, and, oh, three or four trips to Portland totaling maybe fourteen days, it's Portland that I feel wispy sentimental feelings about. My favorite restaurant in the world remains The House in San Francisco, but I really wish they'd just put the whole thing on a house moving trailer and move it to Portland. Well, preferably to Ashland, but I picture it in an urban setting.

Not that San Francisco has ever really felt like an urban setting to me. Even in the depths of the financial district, where you're surrounded on all sides by tall tall buildings and can imagine, depending on your mood, either ticker tape or suicidal stockbrokers falling, it doesn't feel urban. Is it too sunshiny? Too clean? People don't wear enough black? People wear too much black? Too many tourists? Not enough kids? Anyway, it doesn't feel urban. Maybe it feels like Disney Metropolis Land. Portland, on the other hand, even when you're walking through a nice old residential neighborhood with barely a third floor to be seen, feels urban.

Speaking of Portland, have you seen Portlandia? The show? I officially don't like it. I groan when Himself turns it on. And then I laugh at it a lot, so I suspect that I may actually like it. Except for the Feminist Bookstore bits; those two characters annoy me slightly more than the boss in the British version of The Office, which means that they're breaking an annoyance record. I realize that they're supposed to annoy me, but there are limits. However, I suppose that I credit Portlandia for the "put a bird on it" menu innovation at The Original in Portland (see Himself's post for clarification), which might mean that without Portlandia I would have eaten one less piece of fried chicken in my life. So that's a reason to like the show.

Speaking of fried chicken... er... well, one should always speak of fried chicken. I had some today at Smithfield's in Ashland, the only restaurant that I know of that has fried chicken as a side. Not buffalo wings or chicken nuggets, but real proper bone-in fried chicken. I vaguely remember that the book Square Meals mentioned Southern dinners where the main dish was accompanied by platters of fried chicken, so I suppose that's some precedent for fried-chicken-as-side. I approve. I ate entirely off the sides menu today, having two pieces of fried chicken and a fruit bowl. Yum.

Speaking of fruit... well, no. I started writing a bunch of stuff about weeding the strawberry bed and whether we'd eat all the pears from our pear tree this year, and that was boring. So there will be no speaking of fruit. Except that my lifetime aversion to the texture of apples (they squeak in my teeth!) seems to be fading--I ate all of my fruit bowl apples today. Yay me.

OK, speaking of fruit, I'm trying to eat more vegetables. I'm getting older, and it's time to either start eating an at least somewhat sensible diet, or get ready for various health problems  to come if I don't. So I've been cutting sugar drastically and white starches fairly significantly, and eating a fair bit more vegetables. But not a lot more fruit, partly because fruit has plenty of sugar of its own, and partly because it kicks off dessert cravings.

I'm trying to change my habits one habit at a time, so I haven't yet gotten to the fat reduction habit--I'm ignoring fat consumption entirely, allowing myself to (for example) plop as much butter as I like on my broccoli. I'm terribly curious to know if I've been compensating for missing sugar by eating tons more fat, or if the disappearance of desserts and pastries and potato chips and mayo-absorbing squishy white bread may have actually led to a reduction in fat consumption. I rather wish I'd been keeping a food log. Finding out from my cholesterol count seems like a great deal too much work, given the whole blood extraction aspect of it.

Speaking of vampires... OK, no, I have nothing. No new comments about Buffy, nothing about anything new that any of the Buffy actors are doing, not even anything about Firefly. Not a thing.

OK, I seem to be out of random thoughts. I was going to close with something like, "pat the cat", but looking at that cat, he'll take your fingers off. So I just wish you a happy Sunday, or my sympathies on the looming Monday, and hit Post.