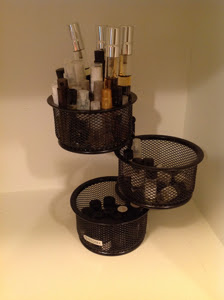 So I was in the hardware store. Actually, I was in the office supply store that lives inside the hardware store, because Himself wanted some manila envelopes. And I saw this whirligig thing with "Rolodex" on it that was presumably intended for paperclips or something, and I thought, "Sample holder!" You do that, too, right? All cunning little small containers are obviously intended for samples; all that talk about paper clips or whiskey (in shot glasses, that is) is just a diversion.

So I brought the whirligig home and dug into my sample box (after clearing off the bacon-scented candle and polka-dotted necktie and and vase and candy dish and Chinese fans that were stacked on the sample box--see why I rarely use a sample?) and picked out a selection of tiny jars and sprayers and vials and tucked them into the three cups and took a photo. That one, up there. This weekend I plan to buy some inexpensive gaudy beads that are just barely too big to fall through the grid of the little cups and pour some into the middle cup, so that small vials can stand up.

This suggests a possible resumption of perfume blogging. Why would I bother to photograph perfume-filled desktop gadgetry if I weren't going to, next, talk about perfume? (Unless I'm going to talk about office supplies.)

So which perfume to start with? On the bottom, those itty bitty bottles are all samples from Ayala Moriel that have been waiting for me to opinionate about them since... er.... well, I'm pretty sure it was before Christmas. In the middle, those itty bottles are "travel size" perfumes from CB I Hate Perfume that have been lurking for well over a year, possibly two or three. The top is jam packed with a bunch of stuff too tall for the other two cups.

I was just about to bleeble on about what I could wear, whether to test the new or the old, bleeb bleeb bleeb, but then I snatched up my decant of Douce Amere and sprayed it under my shirt and on the back of my neck, so I guess that answers that. I like Douce Amere; it has a big, sustained dose of a gentle powdery note that's almost too subtle to catch in some other perfumes. (I can't remember which other perfumes because there's no need; when I want that scent these days I just grab Douce Amere.) But apparently I'm not too much in love with it, because when the rumor was going around that it was going away forever, I didn't spring for a bottle. It didn't go away, right? It just went non-import, or something?

If you're new to my blog you may be saying, "You're the perfume blogger--why are you asking me?" I'm asking because I've been away from perfume land for a little while. For several months I've been stressed or depressed or obsessing about vegetable gardening or sewing or something, always something, that distracts me from perfume. That's why I'm excited to see if I'm going to start perfume blogging again.

You might also ask, "OK, ChickenFreak, you live inside your own head; don't you know if you're going to start perfume blogging again?" Well, no, I really don't. I can intend to start, but I've learned over the course of this blog that I write what I wanna write, based on the whim of the day. I can urge myself to work harder at the blog, or I can slack off and fail to work at it at all. I have some control over that. But the actual topic is apparently not under my supervision. Neither is the fact that I want to say "whirligig" again.

It appears that that is all. Except, you folks who aren't new to my blog, am I going to start perfume blogging again? You've met me (well, at least virtually)--what's your guess?