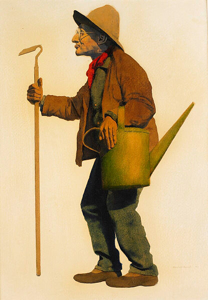 One flaw with growing my own vegetables is that sometimes I'm too tired to cook them.

Today I weeded and re-dug (they were tilled in the spring) two twenty-five-or-so-square-foot beds in The Farm, in the now-cleared summer bean area. And planted yellow potato onions in one and Chesnok Red garlic in the other one. And mulched them both with nice fluffy alfalfa straw. And hoed the bitty weeds out of a hundred or two square feet of already reasonably clear bed, elsewhere, on the "hoe first" principle. (OK, I wasn't doing "hoe first" because I dug first. But at least I did the hoeing.)

While I was putting the garden tools away I realized that (ooh!) there was a garden fork in the shed. I tried it out and learned that the garden fork does a much, much better job of the weeding that I'd already done before I saw it.

While I knew that a garden fork is the tool of choice for nightmarish weeds like Bermuda grass, our main nemesis on The Farm, for some reason I had convinced myself that my long-handled cultivator claw thingie would do the job just as well. But, no; the cultivator claw thingie just lets me apply two hands to the tug-of-war with the Bermuda grass. The fork, on the other hand, breaks up the soil that the Bermuda grass hangs on to, so the grass forfets the tug-of-war altogether.

Anyway. I did muddy stuff. And then I wandered around the garden and stared blankly at the lettuce. (Ready to harvest.) And artichokes. (Ditto.) And broccoli. (One head almost past prime harvest time, clearly thinking hard about bolting as soon as no one's looking.) I ignored them all and ate five or six strawberries right off the plant. The high up ones that I convince myself have no dirt on them. Then I ran away home to drink milk rather than cook anything.

Then I went to the grocery. Walking seemed easier than cooking and I wanted one of their donuts. Vegan donuts. This fact annoys Himself, but they're good anyway. Today they were (grrr!) out of donuts, so I bought something called a Cocoa Crackle. And more milk. Then I walked home and was so tired that I had trouble getting out of my sweatshirt. If it had been a slightly snugger fit I might be toppled over on the couch right now, fast asleep with my arms tangled in the sweatshirt halfway over my head. Snoring.

Then I sat down to type, and produced this. As I look around, I see three watermelons of dubious ripeness, four Delicata squash, and about ten Acorn squash. I bought wild rice to stuff the squashes with when I bake them. I know that there are two bags of beans and a crisper drawer full of cucumbers and two packages of chicken and a pound and a half of butter in the fridge. There are a whole bunch of onions curing outside that I really should brush off and put in a bag. I'm not cooking any of them. I plan to eat the Cocoa Crackle and then an ice cream bar. So there.

It's not as if I actually worked that hard. But I am that out of shape.

I want my donut.

Ooh, but those strawberries were good...