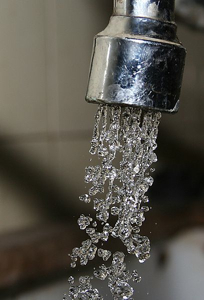 We used a lot of water at The Farm this year. In the excitement of the new garden, we weren't willing to take the slightest chance of any plant being thirsty. While the bills weren't bankruptcy, they certainly took the edge off any claim to have saved on food costs. (Then again, how much is a dead ripe red-to-the-middle strawberry worth? Mmmmm.)

So we'll be making some changes next year. The strawberries and at least some of the bush beans will still get all the water they want, but the tomatoes and peppers and squash and sunflowers and any number of other things will have to do a certain amount of doing without. I'll grow the cucumbers that didn't get bitter this year during hot spells, in the hope that they'll be equally amiable about low water. The corn will have more lavish soil but less water. The herbs and perennial flowers will get a chance to show how nicely established they are. And we're thinking about experimenting with dryfarming. (Drygardening?)

What's dryfarming, you may ask? It's growing without irrigation, using the water that's naturally stored in the soil. Luckily, I'm gardening in Oregon, where the soil is saturated every winter, so there's a moisture bank to draw on. But all the same, dryfarming involves a lot of changes.

The most obvious change, as far as I can tell, is plant spacing - it's drastically expanded for dryfarming. Corn is normally spaced somewhere between six and eighteen inches apart, depending on the variety and situation. Steve Solomon's _Gardening Without Irrigation_ recommends a dryfarming spacing for corn of three feet, and that's for a climate that might be a bit cooler than mine. He also mentions Arizona gardeners that have grown un-irrigated corn at at ten foot spacing. One cornstalk in a space the size of a small bathroom. Yikes.

Steve Solomon has (or had) sixteen acres; space isn't a big issue for him. We have a fraction of an acre, but all the same, I'm planning a little experimenting. A couple of dryfarmed tomatoes at a five or six foot spacing. A few corn plants at a three-foot spacing, or maybe I'll go with two feet and water them a bit. A few un- or lightly- irrigated pole beans. I'll dryfarm at least one patch of garlic -- some sources say that since garlic gets a good deal of its growth in the wet spring, this should be easy. Some sources fervantly disagree. We'll see.

Of course, all that wide spacing does you no good if you allow weeds between the plants to suck up all the water. So dryfarming will require essentially perfect weed control. And, to my surprise and dismay, apparently a nice weed-suppressing mulch actually increases water loss in a dryfarm situation. The explanation for this oddity is that mulch keeps the top layer of soil damp, allowing water to travel by capillary action from the deeper moisture reserves all the way to the top of the soil, where it evaporates away. Without mulch, the top of the soil turns bone dry and and doesn't allow that surface evaporation. If you break it up to further destroy capillary action, you've created a "dust mulch", a phrase that still fascinates me.

So. Dryfarming. I'll let you know how it goes.

Image: By Li-Sung. Wikimedia Commons
Posted by Martha at 12:30 AM