I thought I wanted a low maintenance vegetable garden. And I do, but that's not the overriding goal. What I want is a patient vegetable garden. A garden that will wait for me to have time for it--a week, two weeks, a month--without throwing a weedy, tomato-rotting, lettuce-bolting, tantrum. I want the farm (our roughly five thousand square foot vegetable garden) to be patient.

If you miss a few rounds of that game, the weeds keep on growing. Exponentially, I believe. A bed that would have taken less than a minute to weed a month ago is suddenly an afternoon's work, with all the other beds all around it impatiently begging for attention. At that point the gardener is tempted to just abandon the whole thing and wait for next year.

I got tired of that.

Heavy-grade weed cloth (every time I buy it, they ask, "You mean 'weed barrier'?") is intended as a permanent solution--you're supposed to staple it down and then cover it with mulch. In fact, failing to cover it voids the warranty. Using it in an annual vegetable garden, where you need to turn and amend the soil frequently, is quite, quite mad.

We did it anyway.

Here I'm going to describe some geography. The farm is approximately a square. It has twelve wide rows, each one six feet center to center and about seventy feet long. The planting area of each row was intended to be four feet wide, with paths two feet wide. The last few feet of  each row is too shady for annual vegetables, so I divide each row (identified by a number) into ten six-foot beds (identified by letters). So, a total of 120 beds (from 1A through 12K), each with a growing area four feet wide and six feet long.

Last year, we started covering the whole space with "pro" quality weed cloth, and we'll have the last gaps filled by the end of the season this year. We ran three-foot-wide cloth down center of each path, making a striped farm--three foot dirt, three foot cloth, three foot dirt, etc. Then we ran six-foot-wide cloth down the center of the dirt stripes. (At least, that's how we ended up. Actually laying the cloth was less systematic than I make it sound.)

So, the general idea is that I lift the cloth for a bed or beds, work and amend the soil, put the cloth back down again, cut holes in it, plant the plants through the holes, and when that crop is done, repeat the whole process. Simple, right? 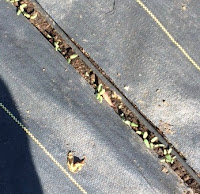 Except, if you cut too many holes too close together, the purpose of the cloth is mostly lost. Lacework isn't much good for weed control. So spacing is an issue. Last year, I started looking for ways to space everything no closer than eighteen inches in both directions, and for many crops that works just fine. Onions can be planted in groups. Bush beans, kale, and so on, make bigger plants with wider spacing, and wide spacing is a part of dryfarming.

But some things, like lettuce, beets, carrots, mache, baby greens, and so on, just don't seem suitable for the wide spacing. It took me until this year to realize that instead of cutting individual holes checkerboard-style, I can cut slits and plant in little rows, I believe called "drills". I effectively get rows eighteen inches apart, that allow any spacing within the row. This also eliminates the problem of trying to spot-water all those little holes; instead, I ran mini soaker hose down the drills. The photo shows baby beets sprouting in the first drill that I planted.

Once something is planted through the fabric, I can't lift that fabric.  So if bed 4G is done and ready to be replanted, but beds 4F and 4H are still going strong, I have to cut. Then, to keep weeds from sprouting through the cut, I have to patch with a short length of fabric--usually one foot overlap on each side. I'm doing my best to amend groups of adjacent beds at once, but I suspect that in the long run, almost every bed will be cut on both sides.

Remember how the original "stripes" were three feet of cloth and three feet of dirt, but I said that the growing area was supposed to be four feet? See, when I chose the three-foot cloth, I thought that eighteen inches of overlap was required to foil the wilier weeds. I was wrong. And I didn't know how much of a pain it would be to lift the cloth, so I assumed that lifting the path cloth along with the row cloth would be no big deal. I was wrong again.

So it would have been better to have permanent two-foot path coverings, so that lifting the six-foot cloth would expose a full four feet for amendment. For now, I'm treating the path cloth as permanent, amending the three exposed feet of dirt (exposed, that is, when I lift the six-foot fabric), and planting with spacing that pretends that the un-amended six inches on each side is fully productive soil. I'm deluding myself that the fertilizer will dissolve into it and the earthworms will work it for me--and I'm treating it as bed and not path and making sure I don't step on it. We'll see if I get a visible edge effect that proves me wrong.

(Edited to add: I forgot the part where the cloth costs money. I hope to amortize the cost across five years, but I can't reliably predict, because I am merrily voiding the warranty. I'll address the cost in a later post about cost of inputs versus value of produce. After I find out whether the terrifying July water bill can be blamed on the farm or the effort to revive an accidentally neglected lawn.)