Sewing: In which I play with the stash 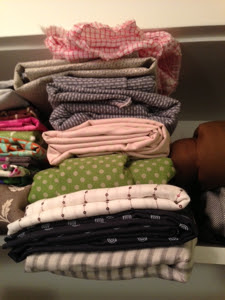 So, what gives a sewn garment that charmless homemade look?

Just to clarify, I think that a charming homemade look is dandy. I don't need my garments to look like they were made in a factory. I would, in my fantasies, like them to look like they were made in an atelier somewhere, hand-stitched by someone with decades of experience working on thousand-dollar gowns. Or perhaps made in a garret by Cinderella's mice. But I don't need that either; I just want them to look...right.

I've recently decided that a flaw of many homemade garments, or at least many of mine, is the use of only one fabric. I was just looking at my most expensive bra, and I counted at least five different fabrics-and-other-things, including solid silky stuff, striped silky stuff, netting, a structural trim with a pretty satiny stripe edged with little dots, and lace in a diamond-shape pattern that develops into a sort of confetti pattern and then a cool irregular feathery thing at the edge. Of course, it's easier for a big manufacturer to achieve all this variety while avoiding an unintended patchwork look, because the different materials can all be dyed precisely the same color. I owned the bra for months before I found myself idly studying the laundry and noticing everything that was going on with it. I had previously just seen it as, well, charming.

If I look up at the stash shelf, I see a hunk of very narrow-wale corduroy in red. It's perfectly Nice, and if I made my cooking coat again, as a sort of warm indoor cardigan shirt, it would be Perfectly Nice. And boring.

I also have a hunk of twill-weave cotton flannel in almost the same red. If I used the corduroy for the body of the coat and the flannel for the sleeves you'd have to step fairly close to see the two different materials, but once you got there, the result would be more interesting. I could then face the cuffs and collar with a fairly matt-surfaced silk in, again, exactly the same color, so that they slide comfortably over my neck and wrists and also add a third visual texture. The transitions wouldn't shout, and wouldn't advertise any wobbles, but the variety would take the jacket from "Meh" to "Oh." I think.

After I stared at those together, I started digging through the stash for other combinations. No commitment, just brief evaluations of prospective fabric marriages. Fabric speed-dating.

For example, this silk chiffon with a print of concentric circles, and this deep berry-colored silk charmeuse, are each beautiful on their own. But together, with the chiffon draped over the berries, they're gorgeous. I could make a sleeveless shell of the charmeuse, and then a sleeved blouse with the chiffon to go over it, somehow arranging for the pure berry of the shell to show through now and then. That would be beautiful. I might also try to figure out how to add something crisp and white and textured; maybe a Peter Pan color to make it into a crazy-children's-birthday-party blouse. Sadly, I can't do that because I have only a yard of the chiffon and a large scrap of the charmeuse, but I'm in love now, and plotting how to merge them in a scarf. 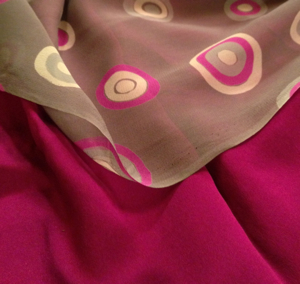 I'm sadly wishing for a better camera here, because I realize that you can't really see the richness of the silk in that photo; it just looks like an expanse of color. It's beautiful. Believe me.

Digging further, here's a beautiful fluid glossy lightweight wool in a very fine black-and-white pattern, with a lightweight but slightly crisp translucent black-and-white stripe. Would the stripes on the lapel of a jacket look too clownlike? What if I just cut the stripes in strips on the bias and used them for piping or a narrow bias edge? Ooh. I think I like that idea. 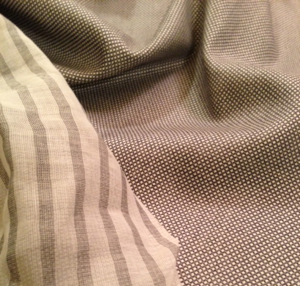 Then there are these slightly metallic dots. I love them, and I think that they could merge in a fraction more subtly, perhaps as the collar of the lapel. Actually, all three--wool, dots, and narrow bindings with the stripes--could theoretically coexist. 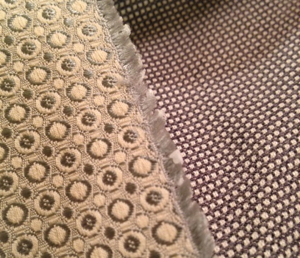 Then there's this circle stuff. I don't think that it could be a remotely subtle touch on the wool, but I think that it could be the primary fabric of some other garment, with the wool as a subtle touch on it. As, again, the collar half of a lapel, or a narrow edge on pockets or buttonholes or rolling round and being an inside facing with just a narrow line on the outside.

Or maybe the strip-strips again, on the circle stuff? Ooh. 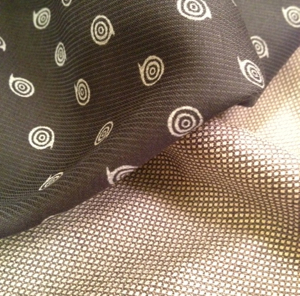 It's a good thing I have five yards of the wool; I get to try at least two things, plus there ought to be plenty of scraps left.

Am I being too conservative? What about the combination below? (That's flowers, not cow spots, I promise.) I could...

OK, I have no idea what I could do, except, oh! The print is a very thin, smooth cotton; it could do just fine as a lining in a knee-length jacket/coat made of the wool, a swingy coat where the lining shows frequently, sort of like that coat that Buffy was wearing in the slow-motion running scene in the library when Kendra...OK, that's a spoiler, but you know that coat? Shaped kind of like that. I'm not shaped at all like Buffy, but we're not at the realism part of the sewing project planning yet. 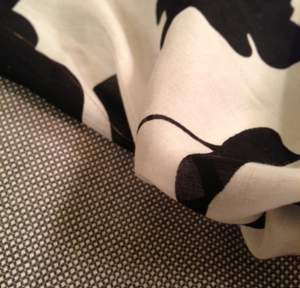