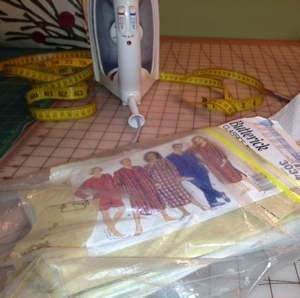 It's a new year. I'm going to try to post each completed sewing project this year. We'll see how that works out. There's not much to say about these actual garments--dead simple pajama shorts. But that never stops me from babbling.

For example, I've had the above pattern for a long time. I bought it new, and I see that it's being sold as vintage from 1983, which would mean that I may have gotten it during my first year of college.

It's the rare old pattern in my stash that's actually been used--every time I resume sewing, I seem to make something from it. I made a pajama top and shorts for Himself from it in a nice sorta-quilted sorta-denim fabric, years and years ago. (Though not quite as long ago as I thought, because I remember now that I embroidered it with my Viking Rose, which I still think of, decades later, as "new".) A top for me in a sizzlingly gaudy green cotton print, a bit more recently. A pair of chicken-print pants, even more recently, featured in the "foot" shot in this post. They're all in at least occasional use. And I would swear that there's a pair with a gaudy pattern of concentric circles, lying around somewhere.

All those years ago, to keep the pattern from ripping, I glued the tissue to some sort of plasticized white paper with rubber cement. More recently I re-traced the pants as shorts on Swedish tracing paper, I guess to avoid folding them up. The pattern now requires its own gallon Ziploc to hold all the pieces--and I lost the instruction sheet. Oops. That's going to make it hard to make the top again, with its neck facing and weird halfway-down button placket.

But pajama shorts are easy enough to build without an instruction sheet.

This time, I didn't use a gaudy print, but instead a quietly tasteful windowpane check that was originally intended for a nice tailored shirt. But (1) the intended tailored shirt pattern has been demoted from its Tried-N-True pattern status due to an unreliable lapel, and (2) that windowpane check started to look, to me, like something that should be matched. I don't match stripes. I just don't. I will someday. Really. But "someday" is distant.

So on one of those "Oh, my God, look at the size of my stash!" days, I grabbed it and cut it into pajama shorts before I lost my nerve. I cut two pairs, one on grain and one on the cross-grain. I was curious to know if the two behaved differently, but I lost track of which was which. I was pleased, though, to end up with no scraps worth saving, at least for anyone but a quilter. I refuse to become a quilter. It's not compatible with hoarder genes. Or, really, it's too compatible. That's the danger.

OK, that's a lot of rambling. I cut the shorts. I did most of the sewing with the serger, with the five-thread safety stitch, with the knife on. I learned that I'm not ready to sew with the knife on for precise patterns--my seam allowances get a little tipsy. But for pajamas, it was just fine. I finished all the hem edges with the serger, too; the only part done with the regular sewing machine was sewing down the hem after I turned it just once instead of fussing with turning it and then turning it again.

I love the serger. Love. Adore. How did I sew without it? Finishing raw edges was my very least favorite part of sewing, and the serger fixes that all up.

Oh, and this is the first pair of pants that I ever made without even momentarily mis-sewing them as one big leg. I suppose the permanence of the serger knife motivated me.

Pajamas. Comfy. Yay. However, they don't photograph all that well if you're not willing to model them. They were unhappy about the lack of excitement in their folded-in-the drawer snapshot, so I went with them folded over the tub. Pajamas are all about bubble baths, after all, right? 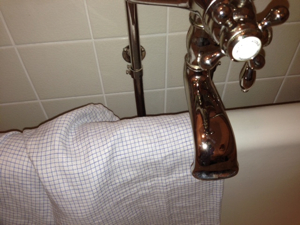