Fashion: What I Wore Friday (Plums!) 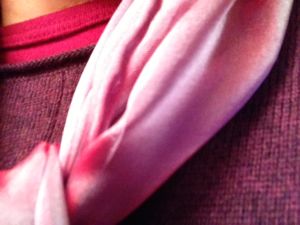 I'm often (contrarily) annoyed when I like something that's in fashion. Last year, I spent weeks craving garments in a particular plum-like color, then realized that I was craving them not because I had conjured up that shade from my imagination, or from seeing an actual piece of fruit, but because that shade was everywhere, in store racks and on people. Once my craving was revealed to be a Caving In To Evil Consumer Forces, I resisted for a while. Resistance was aided by the fact that I could never quite find the right shade in the right garment in the right size.

Then I found what I wanted in a tee, and a darker version in a sweater, and I realized that I already owned a lighter version in a scarf, and the caving was complete. I wore them all today, with the my now-customary knee-length black skirt, black tights, and what I call my Dutch Girl Shoes. (A pair of black Dansko flats, but not the clog-shaped ones.) I enjoyed all the color, and am now tempted to go find three shades of green.

That is all. I suspect, frankly, that I just wanted to post the photo.