Fashion: What I Wore Friday, or, Transcending The Ball O' Wool 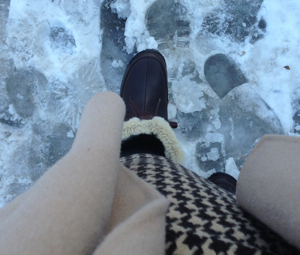 There's been snow and ice on the ground for a week, and temperatures in the single digits (Fahrenheit) at night. That's big winter stuff, for this town. The car giggled at the very idea of driving on the roads, so we trudged (carefully) into town to buy snow boots. I now own five, count 'em, five! pairs of little short boots, but only this most recent pair is suitable for snow and slush.

This was an exercise in attempting style against counter-style influences. Most days I've been a booted ball o' wool, my greatest fashion ambition being avoidance of the garden grubbies jeans, and my greatest ambition in general being Not Falling Down. I did wear silk scarves every day, but not for the look of it--a doubled-up silk scarf clings nicely to my neck and is startlingly warm. Silk is no good at all for shielding my face from the wind, though, so for a day or two I was wearing a plum-colored silk scarf and a plum-colored woollyesque scarf, making me a waterfall of fabric swatches from neck to waist. 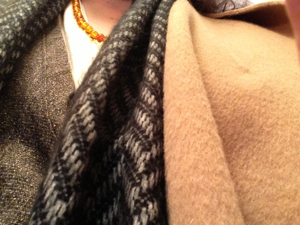 I digress. Friday I was only mostly wool--an unlined medium-length fawn-colored coat, brown-and-fawn houndstooth skirt, and a woven-patterny black and white scarf that haunted me into buying it. The non-wool that crept in was the drapey white knit shirt and textured cotton overshirt from this post. And the amber necklace that Himself gave me long ago. And the snow boots.

Texturepalooza. By my standards, anyway. I enjoyed it. Given my somewhat high girth-to-height ratio, a ratio increased by woolly clothes, I tend to have a Paddington Bear or Boarding School Child look when I bundle up, and I find that I rather enjoy that, too. Even if I lose all the weight I want, I'm never going to be willowy--depending on what I wear, I'll either be curvy or tailored-and-sturdy. So I may as well embrace those vibes now.

It appears that that is all.

Edited to append: Actually, it's not all. I find my thoughts returning to the coat. The fawn-colored coat, advertised as a "car coat". In the past, I never understood the idea of coats being fashion. I remember Mary, in the old Mary Tyler Moore show, trying to figure out how to afford a coat that she loved, and I remember thinking that, well, she already has a coat, so...? I suppose that this is in part about being a child in a middle-class frugal home; I think that most kids at school had one winter coat that they wore every day. They might have had something sportier and and something dressier, but all I saw was what they wore to school.

I own several coats now, but they were all purchased for specific functions: The raincoat. The one-step-warmer-than-a-sweater jacket. The long lined black wool coat for when it's really cold. I did buy the black wool poncholike thing because it was fun, but there were no style'esque thoughts of what it would go well with, or what mood or vibe it might contribute to. I just bought it. I also bought it years and years ago; the fact that it feels a little steampunky when worn with the right shoes is pure coincidence. Most of my coats stick around for decades.

I bought the fawn car coat, on the other hand, with thoughts of how the color and texture and general hang of it would look with clothes and with my figure. I cared that it would work as an outdoor coat but also not be too bulky as an indoor jacket, for occasions when I'm bouncing indoors and outdoors. The soft-shouldered cut was a compromise between the fact that I want a  jacket that fits at both shoulders and hips, but I'm not going to get one that fits precisely until I commission one from that seamstress/tailor that I'm planning to contact in January.

I bought a coat for fashion reasons.

Now that really is all.

Images: Mine
Posted by Martha at 3:48 PM