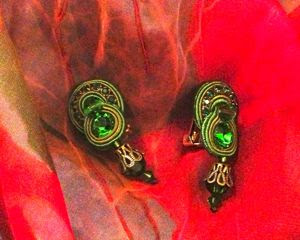 So, What I Wore Tuesday was all neutrals. The same for Wednesday--a white knit shirt with a drapey front that I got from a Multinational Megalith, a beige/brown woven cotton thingie that I got from the sample sale at Webster's, freshwater pearls that Himself gave me some years ago (yay Himself!), a knee-length knit black skirt that also has a drapey front (Megalith), and the same black tights and black flats that I keep wearing. 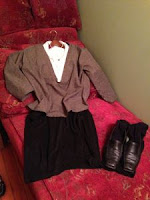 The photo, left, is unexciting. But I really liked this outfit on me--the V shaped neck and rumply draped front worked well for my face and hair, and the vaguely suit-like impression and the pearls made me feel like a well-dressed little old lady about to go to a board meeting. The average woman probably wouldn't think of "little old lady" as a success, but for a person who loves old-lady perfumes, perhaps the appeal is unsurprising. I felt like a grownup. That's both fascinating and a little frightening for someone who's been dressing like a college student for over twenty years. 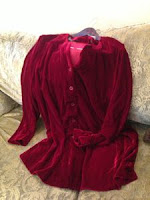 But I did notice an ongoing lack of color. So on Thursday I wore a red velvet shirt that I've had forever, possibly since my early twenties. Wearing this shirt is part of a long-term plan to put idle clothes to work or get rid of them. To reduce the eighties silhouette, I cut out the shoulder pads, and I plan to (gasp) throw it in the Delicate cycle rather than obey the Dry Clean Only tag. If it goes to pieces, then its fate is sealed permanently; if it doesn't, then I'll probably start wearing it more than once a decade. Either outcome is a win, though I'm hoping for the second, because I really do love the red. I love almost any red, but this dark blood-red with no touch of blue or orange is my favorite.

Following the same philosophy of Wear It Or Lose It, I added a pair of screw-on earrings that belonged to my mother or my grandmother or possibly both--I tend to forget these things. Matchyness again. Is matchyness in jewelry wrong? And wore it with, again, another knee-length black skirt, black tights, black flats, blah de blah de blah. Wearing earrings was another cool novelty. Much to my surprise, screw-ons seem to be less painful than clip-ons. 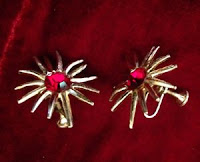 Friday was less matchy. I wore a boxy denim shirt trimmed at the sleeves and hem with purple velvet ribbon and little bits of beadwork, and a silk scarf with a floofy flower print in which red-pink dominated, and (whee!) a knee-length black skirt, black flats, and slate-blue tights. And the same red starburst earrings as the day before.

Am I going to keep a perpetual diary here? Actually, I probably am, though not necessarily recording every single day on the blog. I suspect that in six months I'll be very curious to see what I was wearing six months before. But just to finish up to date, today it was a brown linen shirt with an interesting shape--I'll photograph it someday, probably the next time I wear it--with black SkirtTightsFlatsBlah, the flowery scarf, and those green Dorothy earrings. Color! That's the top photo, of course.

So. Color. At least, color above the waist--I keep on wearing those black skirts. (I have three knee-length and one calf-length, and that's ignoring any lurking among the neglected clothes.) I feel as if I must have pages and pages to write about color, but...nothing is coming out. Not a thing. I guess I can't go all rambling philosophical every time.

So I will, for now, declare that that is all.