What I Wore Friday: 21st Century Jeans (And a Note on Aftelier Cuir de Gardenia) 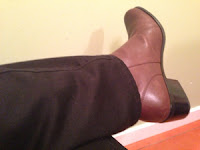 The world must be ending. I wore non-Mom jeans.

I don't mean that I wore those scarey low hipster jeans. But the "hug" of today's jeans ends two or three inches lower than I'm used to. It's giving me the sensation that my pants are falling down, and I keep checking to make sure that my top is long enough to hide my underwear. Because I'm still wearing Mom underwear. (I'm providing too much information here, aren't I?)

I didn't buy the jeans for the non-Momness, but instead for the (compared to my other jeans) narrower legs and heavier fabric, and a much nicer solid black "wash". (Why is it "wash" and not color? I'm sure there's a good reason.) My other jeans are a weird streaky light blue that signals gardening grubbies no matter what I wear them with. 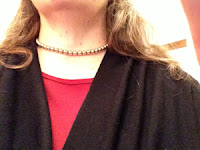 The Momness or otherwise of the jeans is largely irrelevant, because today's top, a drapey cowlneck sweatery thing, hangs to somewhere around mid-hip. But it feels weird all the same, both rebellious (against my determinedly fashion-blind stance) and compliant (for exactly the same reason.)

Purely for entertainment, I took off the drapey sweatery thing and considered how the jeans looked with just the dark-pumpkiny tee underneath, and to my surprise, there was some good there. While I wouldn't wear that combination without (shudder) "shapewear", I was surprised to see that my overall bulk has a half-decent curve in to the waist and out to the hips. I'm not a column. Who knew? Then I put the sweatery thing back on and there's a subtler version of the curve even then. So I'm rather pleased. This is by far the most close-to-current-fashion jeans look I've worn since--I was going to say "since forever", but there was a moment in my teens, in snug jeans and a gauze top...

Momentary "have I told you this before?" divergence: You know how sometimes on What Not To Wear, they'll ask the subject of the show when they last felt beautiful? If I were the subject, that would have been my answer--that moment when I was fourteen, more or less, looking in a full-length motel mirror while on a driving trip to meet one of the parents' relatives. I thought that I looked beautiful--and I thought that, therefore, the mirror must somehow be defective.

All right, moving on. I didn't feel beautiful in today's jeans, but I felt good.

Did I mention that after I bought boots, and more boots, I remembered that I already owned boots, and more boots, purchased several years ago? I now have four (four, count 'em, four!) pairs of little short boots. Aparently I've been having a little-short-boot craving for quite some time, one that I didn't know how to actually deploy.

Today's boots waited a very long time (five years? ten?) to get to work. I wore them for the very first time a couple of weeks ago as part of an undocumented skirt outfit, with brown tights, to avoid the effect of, "Oh, my God, someone cut off her foot and glued on a boot!" that I got when I tried them with plum-colored tights. I wore them again a few days later with the gardening grubbies jeans. They didn't seem all that happy about that; I think that they crept in while I was sleeping and instilled a post-hypnotic suggestion to buy the non-Mom jeans. Except, I'm told that brown boots with black jeans are not ideal, so perhaps they got the message a little muddled.

It snowed today and I needed a hat when we went to lunch. I quite forgot that I owned this one, a sort of plaid newsboy cap, so I didn't wear it. However, that may be just as well--I'm beginning to conclude that a newsboy cap with long hair is "cute", and I definitely don't want to be cute. It's better if I put my hair up, but my hair generally declines to stay up.

The perfume? Aftelier Cuir de Gardenia extrait; I've started buying samples again. I didn't give it a proper review-esque monitoring, even by my rather slack review standards, but I like it very much. It started out both feminine-ladylike and delightfully animalic-dirty, two separate aspects that managed to mesh perfectly. It was fairly emphatic, though it still wasn't a projection bomb--a good thing, in my book, though I realize that many people wish that naturals would speak a little louder.

Over a few hours the ladylike aspect grew stronger, and I got a whiff of New Barbie Doll Note. I always assumed that this scent came from something synthetic; now that I've experienced it in a natural perfume, I'm determined to figure out exactly what produces it, similar to the way that I figured out that Pencil Eraser Note is iris. 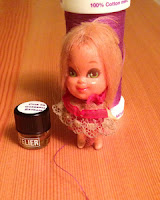 New Barbie Doll Note was accompanied by Smelly-Doll Note--that is, sweet peas. That tiny doll in the photo, one of my favorites as a child, came pre-scented in a perfume-bottle-shaped plastic clamshell. Officially, she was a Liddle Kiddle, but we called her Smelly-Doll. I always assumed that she just smelled of "perfume", until I encountered my first real life sweet pea at a relatively advanced age and immediately flashed on "Smelly-Doll!" Did Mattel really spring for a photorealistic sweet pea scent? I can't evaluate her scent any longer to try to answer that question; it's long faded.

So Cuir de Gardenia shifts, for me, from a delightful animalic-ladylike melding to equally delightful childhood nostalgia--dolls, flowers, and candied notes. I love it, but I doubt that anyone else will share exactly my experience of the drydown.