Fashion: Versus Sewing. And Murphy's arrived! 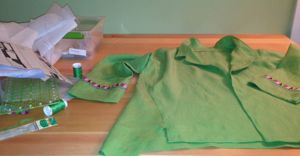 It shouldn't be "versus", right? The sewing should support the fashion. The fashion should encourage the sewing. The ability to create a garment in whatever color and fabric I want, fitted to exactly my size and shape, should be a dream come true for the fashion.

But I've been less interested in sewing since the fashion thing. Now, I would have spent less time sewing lately anyway, due to being snowed under at work. But usually no amount of snowed-under stops me from being dragged in, tractor-beam style, whenever I'm within six blocks of the fabric store. And lately, I haven't been there so much.

I think that's largely about trying-on. A few weeks ago, I tried on a good two or three dozen garments at a local store, trying and rejecting style after style before finding a couple of things to actually buy. That's years' worth of sewing, at my turtlesque rate. Sewn, each different style would have involved choosing a pattern, fitting it, and making at least one muslin before I could have any real confidence that the style worked or failed on my body. And this new sense of discovery and rebellion just isn't prepared to wait for that. I want to try on things, and own things, right now.

And there's the "homemade" issue. While I would argue that the workmanship of many home-sewn garments is superior to that of many manufactured garments in terms of fit and durability and fabric quality and whether the buttons are going to merrily leap to the floor as soon as you're not looking, that doesn't change the fact that many of those home-sewn garments look home-sewn. And in my case, they don't have that magnificently hand-made designer "Oh, my God, this has real padstitching by hand!" look, or even that joy-of-creation look, but instead the "well, I'm sure that your skills will improve with time" look.

It's going to take a while for my skill to reach a point where I can confidently feel that my creations are as good as or better than store-bought. So I'm going for the joy-of-creation angle. For example, I finally almost finished the green Sewing Workshop Liberty Shirt that I cut out who-knows-how-many months ago (it still wants buttonholes and buttons), and I added (gasp) trim. Bright trim. Trim that I bought for the circus pajamas. Look look look--trim!

What circus pajamas, you may ask? Well, once again I've been looking at the discussion of the SWAP, or Sewing With A Plan, contest at Stitcher's Guild. And this time I thought that I'd go with an area that involves minimum stagefright: Pajamas. Gaudy, festive, circus-colored pajamas.

I won't finish the SWAP. Probably. I never have before. Though this time, I may well not finish because I make too many garments early--the SWAP doesn't officially start until December 26. I've already finished one pair of sleep shorts, in a fabric with multicolored swirls on a green background, with a "tuxedo stripe" down the side seams in orange ribbon with yellow swirls.

But that wasn't quite festive enough for me, so I went shopping for ribbon. The fact that it was Small Business Saturday and Fabric of Vision was having a Black Friday weekend sale on ribbons and trim made this step mandatory. Right? By the way, I found Cthulhu ribbon. OK, its designers no doubt think its octopus ribbon, but it's Cthulhu. Really. 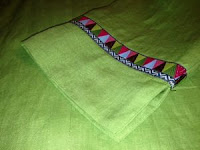 And then I got that green shirt nearly finished and found myself eyeing the ribbon. And the shirt. And the shirt. And the ribbon. And the result is what you see in the photo. Joy of creation. Not gaudy enough for circus pajamas, but the gaudiness is limited because I plan to wear it outside the house. Preferably tomorrow, before I lose my nerve. If I don't get around to the buttons by then, I'll declare it a jacket and wear it over a tee. A bright plum-colored tee.

I've veered off subject, haven't I? Sewing, that is. And how it will mesh with the new fashion thing. Oh, and I failed to mention the Wildly Exciting Event that got me rushing back into sewing this weekend: I got my Murphy table!

See that table that the shirt is on? It's five feet long by three feet deep and it's hovering over the chaise shown in the second photo in the Chasing Color post. When I'm not using it, it folds up against the wall and I can flop down on the chaise again. I can now sew in my den and leave projects up just as long as I darn well please. Bwahaha!

The Murphy table was a joke when I first mentioned it. Then I kept coming back to it. Then Himself discussed it with Ben the Builder. Then the two of them designed it and Ben installed it. And now it's here, sprouting from my wall. This is ever so exciting.

Um. I'm not so much veering off subject as ambling around randomly. I suppose that my vague conclusion here is that I want my sewing to serve my new fashion interest, and that goal will require a plan. The closest thing that I have to a plan right now is:
Anyway, it's all fun, and that was the plan, right? Joy.