Food: Back on the Wagon 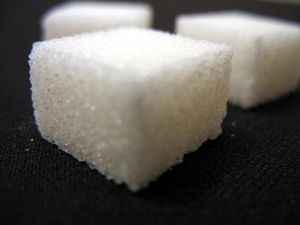 Did I mention that I fell off the low-sugar wagon? Yeah. Not so much fell as leaped, claws extended toward the nearest candy treat. Stress, work, travel to That City Where St. Cupcake Lives, and it all fell apart.

Saturday I'm starting again. I'm prepped. The sliced turkey, olives, and Greek yogurt are ready in the fridge. (Greek yogurt, you might ask? That's milk, and milk has carbs, you may say. Yes, I know, but a limited dose of the stuff worked well last time.) We've got plenty of teabags for iced tea.

So what's the plan? The same one that worked last time. Starting Saturday, no candy, no cake, no sugar-bearing condiments, no sugared drinks, no fruit juice drinks, nothing that's hiding sugar in its depths, except for:


I realize that that's probably a year's worth of carbs for a true low-carber.

Last time I did this I cut out the sugar, waited a few weeks, and then cut the simple starches. This time I think I'm going to try to cut them both at the same time, because I think that just extended the misery--once they were both pretty minimal, I felt OK and was no longer tempted to detach and eat the limbs of innocent passers-by. So, no potatoes, no white rice, no potato chips, no bread, and so on and so on. For the first few days, in fact, I'll probably also cut out the whole-grain, er, grains, restricting my bready eating to the crispbread that I make my turkey sandwiches with. I'd cut that out if I could, but I just can't; I've tried. Turkey without anything filling the role of bread depresses me.

Oh, and no milk. Lotta sugar in milk. Also, Himself thinks it makes me crazy.

So, turkey. And chicken. And pickles and olives and vegetables. Massive quantities of them, and zero effort to control fat. This is a single-topic diet. There will be butter on the vegetables and mayonnaise on the turkey-and-crispbread. (I just rushed to check the mayo jar for sugar. Nope. Thank goodness.)

Wish me luck. And best keep your limbs out of reach, for a little while.