Fashion: What I Wore Tuesday 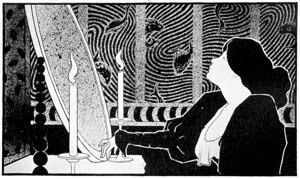 Tuesday I wore a calf-length black linen skirt, a brown heather crewnecky knit thing with decorative visible serger seams (architecture! yay!), black tights, little navy blue loafers, and the silver necklace photographed in the frippery post. You can see it all lounging on the Fashion Chaise in the photo there. (I've realized that the conflict between refusing to be pictured in my own blog and writing about a visual subject can be resolved by allowing my clothes to star in their own photos without me.) 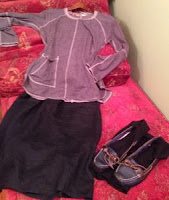 This wasn't a fashion triumph--it was all neutrals, and the navy blue, in particular, had no excuse for being there. I'm choosing to read it as black. But all the same, this outfit is a successful implementation of some of my goals.

First, of course, I "dressed"--I wore a planned set of clothing. And it all fits--it traverses my curves rather than drowning them in a heap of fabric. It's casual enough to wear on jeans occasions while looking far better on me than jeans. And it's comfortable enough to wear all day until I go to bed, though that means that I have to be careful not to splat anything on it when I eat dinner.

That extra care feels new. The book Overdressed (Elizabeth L. Cline) reminded me that there was a time when people took off their "good" clothes when they got home every night, and aired and brushed and neatly hung each garment, because clothes were scarce and expensive and it was important for them to retain their good-clothes status as long as possible. I don't know if people still do that very often. I'm embarassed to say that this Saturday when I changed out of the jeans and tee that I had worn for gardening, I not only dropped them where I stood, but later, since my hands were full and I was in a hurry to tidy, kicked them across the floor from bathroom to living room to laundry room. This is a far cry from the reverence that clothes once received.

I would never do that to a garment that I had sewn, or to most of the garments that I've been buying lately. I'm setting that as a goal for new clothing purchases: If I'd be willing to kick the garment across the floor, I shouldn't be buying it.

I probably won't be explaining that goal to salespeople.

Another goal is to consider who my money's going to. For example, I was feeling guilty for buying several garments from a company that I categorize as a Multinational Megalith, but then I realized that this particular Megalith offers an unusually extensive selection of clothing in plus sizes. I want to encourage that. But I also want to encourage fair wages. And safe working conditions. And environmentally friendly production and materials. And small businesses, both manufacturers and retailers. And high, non-disposable quality. And local business. Whee! Sometimes it seems as if I should have a scoring checklist for each garment.

Tuesday's clothes would have gotten a decent score on that checklist. I made the skirt with natural fiber fabric that I bought from a local shop (Fabric of Vision). I bought the crewnecky thing from another local shop (The Websters). It was made by a company (Odd Numbers) that appears to be small and independent, emphasizes environmentally friendly dyes and natural fibers, and produces designs that I like.

The necklace, as discussed in the frippery post, was made by (Catherine Hartley), and purchased from (One Of A Few), small businesses, though they weren't local to me. I think that I bought the shoes at a local shop, though my memory is fuzzy there. Only the tights violated most of the rules--synthetic fiber, made by one Megalith and purchased at another. At least I bought them in person instead of having them shipped.

All of this sounds picky and geeky. I've realized that the geekiness helps me to enter a world where I don't feel welcome or knowledgeable. Long ago, in a post about Bvlgari Black, I said "I prefer geek perfumery. I like things best when I'm the one with the extra knowledge." That's what's going on here. Reading books about fashion and having quirky, high-maintenance demands for the clothes that I buy make me feel more in control.

For similar reasons, I check seam finishes and other construction details when I'm in stores that sell serious costs-more-than-a-mortgage-payment designer clothing. Construction is the rare area where I have more of a clue than the average fashion shopper. It doesn't make sense for me to touch the stuff; I'm just there to learn from the colors and shapes and styles and then run away to cheaper retailers or my sewing machine. Nevertheless, I examine their expensive interiors--gently, and with clean hands.

(It's a little weird sitting here with that disembodied outfit lounging five feet away on the chaise. It looks more ominous in person, though still ladylike, as if it might get up and demand a glass of iced tea.)

(Otherwise, that is all.)

Illustration: Wikimedia Commons.
Photo: Mine.
Posted by Martha at 5:48 PM

Labels: Being A Girl, Fashion, Shopping, Style, What I Wore